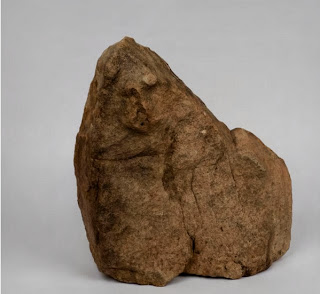 From SANTA FE NEW MEXICAN:
A Santa Fe landscaper believes he sees the face of Jesus Christ on a lump of rock. Paul Marcus said he was finishing up a water feature in a yard at a Rancho Viejo home south of the city when he set up on its end a 40 to 50 pound stone that he intended to incorporate into the landscape.
“I continued to work there a couple of days until I just happened to take a few steps back to see how everything was developing, and then it just popped out at me,” he said. “I just went, ‘Oh, my gosh, look at that!'"
Marcus said he’s been keeping the rock at his own place, but that he and his client would consider selling it.
“I don’t know if something like this would generate any money or interest or not,” he said. “I’ve never experienced anything like this. But whatever it put in my pocket, I would definitely put 10 percent of it into the church.”