Right wing commentators often take the piss out of liberals for putting political correctness before everything else. The thing is, it's funny because it's true.  Liberals are knee-jerkingly suspicious of anybody campaigning for justice if the people they are campaigning on behalf of are being persecuted and oppressed by muslims. This has resulted in the continuation of a 1400 year holocaust, the genocide of millions upon millions of Christians in the Middle East, Asia and North Africa. This genocide has not been committed by Islamist terrorists, it has been committed by ordinary, orthodox muslims such as those doing the killing and imprisoning of Christians in Pakistan at this moment in time as well as their devout leaders.

Once upon a time Christian nations, especially those in the West, were just as wickedly violent towards people of other faiths, especially those who were Jewish. But this is not the case now and we are, as we can do no other, living in the present. At this moment in time it is Islam that is guilty of sectarian crimes against humanity and our embarrassment about the sins of our ancestors should not stop us from condemning this as loudly and vehemently as we would condemn our own if they started behaving in such a manner - our condemnation of attempts to put gay people to death in Nigeria and Uganda is an example of what I am referring to.

The people being violently oppressed in Pakistan are our brothers and sisters. Not because they are Christians but because they are human beings.  Because we are human beings we should start kicking up a fuss loud enough to be heard in heaven, in fact enough to be heard in the heavens of all the religions in the world. political correctness should have nothing to do with it. 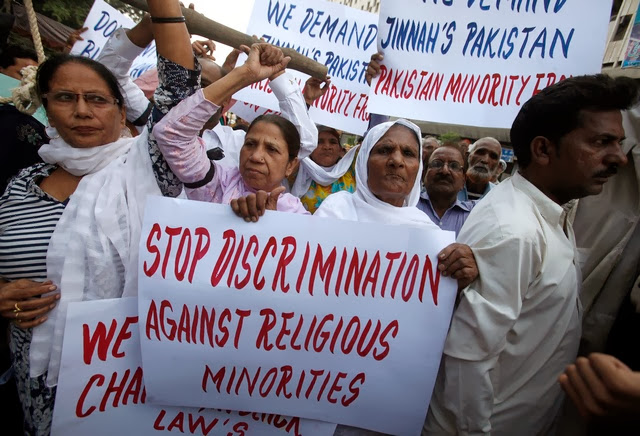