Latter Day Saint bishop, Kent Hendrix, woke up Tuesday to his teenage son pounding on his bedroom door and telling him somebody was being mugged in front of their house. The 47-year-old father of six rushed out the door and grabbed the weapon closest to him — a 29-inch-long carbon steel samurai sword. He came upon what he describes as a melee between a woman and a man. His son called 911 while he approached the man along with other neighbors who came to help. The martial arts instructor didn’t hesitate in drawing the sword and yelling at the attacker to get on the ground.

“His eyes got as big as saucers, and he kind of gasped and jumped back,” Hendrix said by phone Tuesday afternoon. “He’s probably never had anyone draw a sword on him before.”

The man ran down the street with the barefoot Hendrix and others in pursuit.

Hendrix said he couldn’t catch the man before he fled in his car, but he picked up a ChapStick that the man dropped and memorized the vehicle’s license plate. 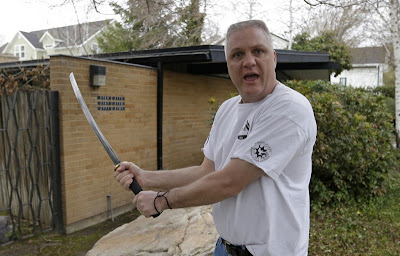