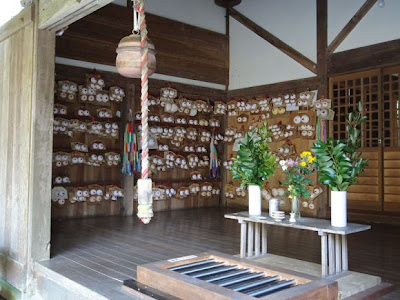 Coming across this Shinto shrine in Soja Okayama by chance you might think you’ve stumbled into a cartoon eye factory. However, this is Karube Shrine, also known as Oppai Jinja or Boobs Shrine. Shinto shrines in Japan are all said to enshrine a certain deity or deities. Boobs Shrine houses five Shinto gods, yet none of them have anything to do with women’s breasts. However, a long time ago people believed that the God of Milk existed in this area. For a long time the God of Milk was only known to the local people. However, a TV variety program from the 80s and 90s, featured Karube Shrine during a segment on unusual temples and shrines. Since then Boobs Shrine has gotten nationwide recognition and women with breast concerns all over the nation have come to pray for their health.

Since the God of Milk isn’t an official god of the temple the offering doesn’t have to be done in the traditional way. In fact, the Soja-Kibiji Chamber of Commerce has also set up a long-distance offering kit. For around 2,000 yen (US$21), you can buy an ema pre-fitted with a pair of boobs delivered to your home. You can write your wish and send it back to the Chamber of Commerce who will offer it up to the God of Milk for you. These kits are also useful for locals to who just can’t make the time to craft some breasts of their own, and it comes with a sporty teat shaped charm you can keep with you at all times. 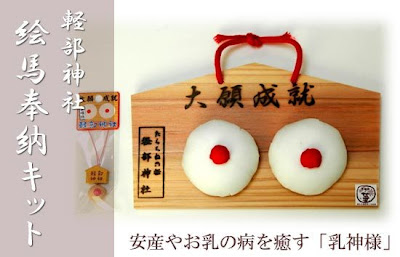 I realise that all this might appear a little strange to those of you from western cultures but I think it's one of those things that you shouldn't really knock until you have tried it for yourself. Or, to put it simply, suck it and see!