Anything boys can do, she can do better. Or at least that’s what one 11-year-old girl in Philadelphia is trying to prove on the gridiron. Caroline Pla has been playing football (not proper football but American football) since she was 5 years old. She was an all-star offensive guard for the Catholic Youth Organization football league in Doylestown, Pennsylvania, and was the only girl and played for the CYO Our Lady of Mount Carmel league in Bucks County for two seasons. She was planning to return for a third. But that was until the Archdiocese of Philadelphia stepped in.

“[Her father and I] were told in the middle of the season that Caroline could no longer play because 'football is for boys,’” says Marycecelia Pla, Caroline’s mother.

Her mother began a petition on Change.org to encourage the Archdiocese to change its “no-girls” policy. The petition reads in part: “Caroline wants more than anything that this rule be updated and modernized to reflect the times. Simply change the rule and allow girls to play.”

The petition currently has more than 100,000 signatures.

Larry Mendte, a writer for “Philadelphia” magazine who has been following the controversy says the ban isn’t just because Caroline is a girl. He writes, “Pla was banned from playing football because she is a girl and she is good.” 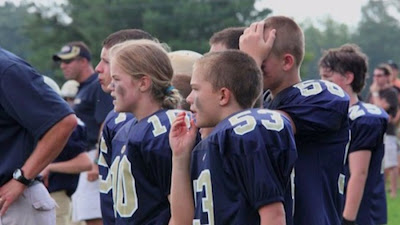 I've got a copy of "The Catechism of the Catholic Church" and nowhere in it is anything about American football or any other team sports. Certainly it does not go into detail about who can play and who can't play in the Doylestown Catholic Youth Organization football league. It's almost as if God doesn't care.

Actually I can think of a few reasons why a young girl shouldn't play a contact sport with a bunch of young lads approaching that confusing time of their lives, which could be argued to be valid. But none of them are, "Because football is for boys."

Personally I'm all for women playing football, rugby, cricket, all team sports in fact. The only thing that I think the authorities should insist upon is that the female competitors wear nice, short skirts like the women wear in tennis, rather than trousers or even shorts. I realise that my suggestion may be regarded in some quarters as being sexist in tone. In my defence I would point out that I am more than happy for male competitors in such sports to be expected to wear nice, short skirts as well. In fact, I think nice, short skirts on both sexes would result in an increase in the popularity the games, more income for sportswomen and the added bonus of a greater toleration of transvestitism within society.