Police are seeking the identity of a monk who was photographed having dinner with a woman in public. The picture has been uploaded and shared through various websites.

The monk's action was not appropriate but was not considered a punishable offence, said Phra Ratcharatnaporn, head of the Phravinayadhikarn - a group of monks appointed to oversee monastic discipline. However, if there is evidence that the monk was eating after midday then the man could be disrobed, he said.

On the other hand, this did happen in Thailand... 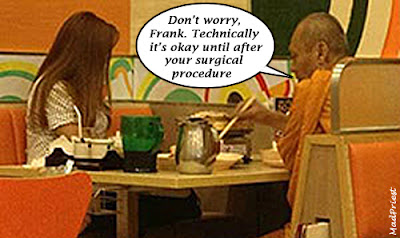