In ultra-Orthodox Jewish communities across New York state, women wear long skirts and long-sleeved, high-necked blouses on the street; men wear suits and white collar shirts, buttoned to the neck; and girls are told the precise color and thickness of the stockings they can wear to school. And these aren’t just recommendations – community modesty codes are strictly enforced. Not just by social custom, but by a self-appointed, shadowy group of men who police a predominantly Hasidic neighborhood in North Brooklyn, according to a report in the New York Times.

“They operate like the Mafia,” Rabbi Allan Nadler, director of the Jewish studies program at Drew University, told the Times. “They walk into a store and say it would be a shame if your window was broken or you lost your clientele,” he said. “They might tell the father of a girl who wears a skirt that’s too short and he’s, say, a store owner: ‘If you ever want to sell a pair of shoes, speak to your daughter.’”

The issue of non-compliance with ultra-Orthodox modesty rules has crept into neighboring secular areas. In 2009, Hasidic South Williamsburg community members successfully rallied to block a bike lane that brought outside bicyclists — specifically, women wearing shorts — through the neighborhood. 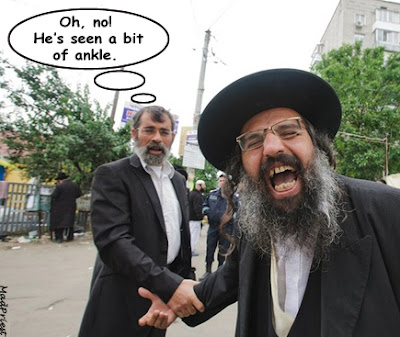