In an effort to flex its moral muscle in the professional sports arena, the Vatican has invited top-tier Christian athletes Tim Tebow and Jeremy Lin to help bring ethical values back to a scandal-ridden world of sports. The Pontifical Council for Culture is planning to host an international conference on re-instilling values in sports this spring, inviting representatives from top world governing bodies like FIFA (the International Federation of Association Football), the International Cycling Union and the Italian National Olympic Committee.

Msgr. Melchor Sanchez de Toca Alameda, head of the council's "Culture and Sport" section, told Catholic News Service on Wednesday that pro sports "have become a commodity that is subordinate to the free market and, therefore, to profit." Instead of sports being an activity that builds important values, respects human dignity and helps shape the whole human person, "it has reduced people to merchandise."

Well, the monsignor has certainly hit the nail on the head there and this sounds like a fine initiative. However, I am more than a bit worried that it will just result in a return of gay-bashing to English football and the banning of sportswomen from becoming team captains. 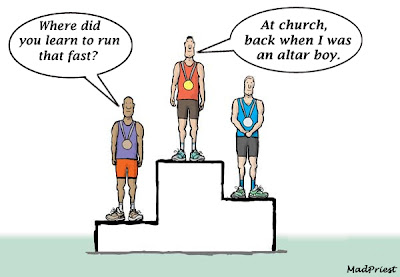