From MY CENTRAL JERSEY:

In the angry eyes of Christians in Santa Monica, Calif., Damon Vix is the atheist who stole Christmas. He is blamed for the city’s decision to ban all private displays in Palisades Park, ending a tradition of 14 Nativity scenes erected by church groups in the park every December for the last 60 years.

The Santa Monica Christmas controversy began several years ago when Vix decided to counter the crèches by posting a sign with a quotation mistakenly attributed to Thomas Jefferson:

“Religions are all alike — founded upon fables and mythologies.”

Other atheists joined Vix to demand space, forcing the city to set up a lottery to divvy up slots in the park. Tensions mounted in the community last December after atheist groups flooded the lottery pool and won most of the available space. In June, frustrated city officials tried to end the holiday war by banning all private displays in the park. Churches fought back with a lawsuit. But last week they lost round one when a federal judge allowed the ban to take effect.

The dueling displays in Santa Monica are the latest example of a trend across the country. Atheists are employing a new strategy to challenge the presence of religion in the public square: Wherever religious messages are allowed in public parks or government buildings, atheist groups increasingly demand equal time and space.

The atheists are being petty, juvenile and, above all, hateful. As far as I know, none of the nativity scenes have ever included banners calling non-Christians stupid or have lampooned the beliefs of others. If they really must have "equal time and space" then, if they were sincerely trying to make a serious political statement in a truly humanist manner, they would ask for the time and space to be at a different time of year when their actions wouldn't offend anyone other than religionists as bigoted and angry as they obviously are.

Alternatively, I have a suggestion for those terrible creche builders. They should claim equal exposure with the pagans. For every Christmas tree and Santa Claus seen on public property in the United States, American Christians should be allowed to build a nativity scene nearby.

Please don't get me wrong. I don't want to outlaw atheism or shut atheists up in the same way they want to shut Christians up. In fact, atheism is a useful thing with benefits for society. It's good that intense young men with poor social skills who can't get laid to save their lives, have interests like atheism and "Star Trek" conventions, to take their mind off their unsatisfied libidos. It's a better option than bromide.

However, there is at least one atheist who has tried to be humanist in his "war on Christmas." In Leesburg, Virginia, a skeletal Santa, crucified on a cross has been legally erected. Its atheistic creator says that it symbolizes the "death of the true meaning of the holidays by greed and commercialism." Of course, he might be taking the piss, but it doesn't matter. Whatever the true intention of the artist it makes the point that he professes it should very well. 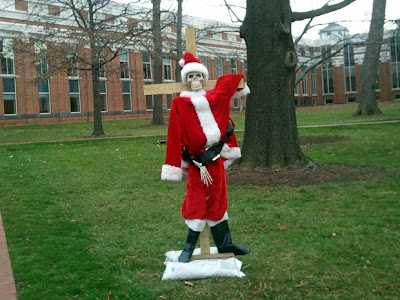