A man has been charged with blasphemy in Greece for lampooning a monk on Facebook. Police allege the unnamed 27-year-old set up a Facebook page referring to the late Elder Paisios by the mocking name Geron Pastitsios, which is a Greek pasta and beef dish. In a screenshot of the Facebook page, which has now been removed from the social network, the monk is shown with a plate of pastitsios in front of him.

The suspect was arrested on the island of Evia at the weekend after complaints were received by the Greek police's cyber crime bureau. He could face a fine of up to 3,000 euro (2,390) or two years in prison under Greece's strict blasphemy laws.

Quite right! Giving church leaders pseudonyms is a horrendous offence and makes God burst into tears and stomp off to sulk in his bedroom. If society allows a dead Greek monk to be lampooned in such a way the next thing you know some insolant, unemployed priest will start referring to the Archbishop of Canterbury as "The Grand Tufti" all over the internet. And that would make God so angry that he would probably send down deadly flu virus to wipe out the whole of humanity. 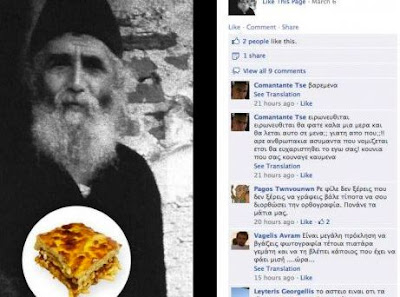