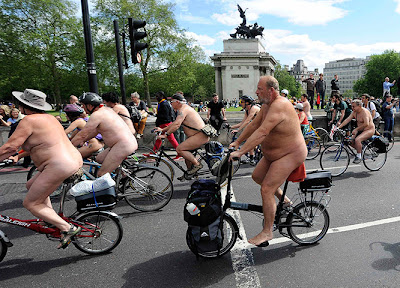 Cyclists in cities around the world have taken part in the World Naked Bike Ride. Started in 2004, the clothing-optional protest aims to promote cycling as a greener mode of transportation, and encourage a body-positive culture. San Francisco, London, Madrid, Amsterdam and Guadalajara were among the cities that took part this year.

Well, that all sound like good, clean fun, but not if you are a Roman Catholic, of course. Here's a wonderful piece of paranoia written by Francis Phillips at THE CATHOLIC HERALD:

The website of the WNBR also informs us that “Seattle has a well-established naked bike ride during the Summer Solstice Parade.” Mention of the “solstice” suggests there is a neo-pagan element to this gathering. Apparently witches’ Sabbaths always include nakedness and lewd behaviour, presumably as a deliberate affront to Christian modesty and self-restraint. So there is a dodgy sub-plot here.

... which is a load of godbollocks if you ask me.

As a matter of interest has anyone noticed Sam Norton in the London photo at the top? 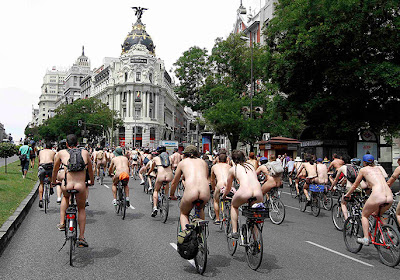