The head of the Anglican Church of Kenya (ACK), Archbishop Eliud Wabukala over the weekend tied the knot with one of the church's senior pastors, in a private wedding conducted in Mombasa. The prelate and his relatives two weeks ago paid Sh140,000 to Luvuna's family in Shimba Hills, as part of the dowry.

Wabukala's wife died almost one year ago, leaving him with several children and sources intimated that due to his position in church, he was expected to get another wife to replace her.

Wabukala preferred to have a secret wedding, according to his close associates, since there were 'several people' who he feared, may interfere with the ceremony.

Hey, if Kenyan Anglicans want to insist that bishops "get themselves wives" and pay for the privilege of having sex with them, that's their concern. It's not my culture, of course. In my culture we regard women as human beings rather than property. I'm sure glad we didn't sign that bloody covenant. If we had I would have had to insure Mrs MP under my home contents insurance and I can't afford that expense at the moment. 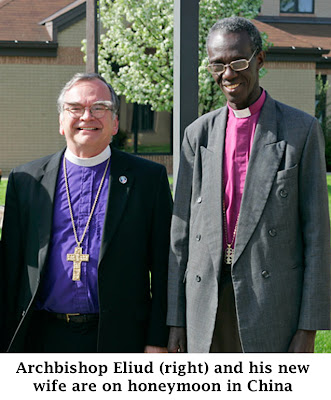