I had a nightmare a couple of nights ago. I often have them.

I was in a large church that was absolutely packed. At the front were various dignitaries plus the vicar that, 15 odd years ago, I had to report for inappropriate behaviour towards young people and children following a mother's complaint (the church covered it up and the whole sorry incident led to my illness and eventually the loss of my vocation). I had sneaked into the back of the church because I was not welcome. As the service got under way I ran down the aisle to the centre of the church and shouted "(the name of the abusing vicar) is a paedophile!" I shouted this out loud as my wife was able to tell me exactly what I said when I got up in the morning. The last thing I remember in my dream was being attacked by all the people in the church and me frantically looking for someone who would tell them that I was telling the truth.

I have lived for years with anger towards the Church of England for the way it has not only failed to care for me but actually, and deliberately, has gone out of its way to sweep me under the carpet as thoroughly as it swept the abusing vicar's crimes under the carpet. To the church I am the guilty party and they absolutely refuse to view me as an injured party. When I was recovering from my breakdown they tried their hardest to sack me on the spot. It took them another 8 years, during which they pummelled me with extreme discrimination, to finally get rid of me (conveniently, for them, just before the Church of England adopted more humane employment practices).

It is a great anger. I have tried everything to rid myself of it. I have moved away from the diocese where my injury occurred, I have had endless counselling and I've tried to work through the anger on my blog. But it is not going to go away. It has now become another reason why the Church authorities will not give me back my priesthood. I visited a "senior" priest in the diocese a couple of weeks ago and he was most concerned that if I came into contact with a congregation I would upset (infect?) them with my anger. He probably had good reason to worry but his lack of any other thought than the protection of the status quo was just typical of the cold, businesslike ethos of the Church of England in general.

I know what it will take to rid me of my anger. I know what it will take to heal me. Nothing less than an unreserved apology from the Church and the full restitution of my priesthood and living (which was stolen from me, in the first place, without any reference to due process). An apology from the Church, as the senior priest I have just mentioned told me in no uncertain terms, is never going to happen. So, even if I was to get my livelihood and ministry back, I expect the anger would still remain. In fact, it would be aggravated by my knowledge that I was working for an institution that proclaims one thing and yet acts completely opposite to that which they proclaim. What's love got to do with Church of England? Not a lot in my experience. Personal integrity is very important to me. I don't think I would survive long as the ecclesiastical version of a dodgy car salesman.

I emailed a bishop about my nightmare. He emailed back with an up to date statement on the Church of England's policy on clerical child abuse. That was all. It amazes me how lacking in discernment the powerful in the Church can be (or is it just a fear of responding to a cry for help in anything resembling a humane way). I know it shouldn't surprise me after all my years of experiencing the crass and clumsy human resources techniques of The Church of England (PLC) but it does.

My wife came up with a brilliant metaphor after I told her about my nightmare. She said I was like a moth flying around a light bulb, frantically banging itself against the lightbulb without any hope of achieving whatever it is it wants from the it. Very good, Mrs MP!

The senior priest I met the other week, said he would contact my local vicar and ask him to get in touch with me so that we could explore the possibility of me helping out occasionally in his parish. The senior priest said I should not expect to hear from this vicar during Holy Week as he would be too busy, or expect to hear from him the following week as he will be taking a week off. On Saturday I received an email from the vicar saying that he was, in fact, on vacation during this week coming. I have to go and sort out my in laws' the following week so I will not get to meet this vicar until well after four weeks since my visit to the senior priest. It has been seven months since I initially visited the assistant bishop of my diocese (which was appointed that I had to wait two months for). If a parish priest treated a member of his or her congregation with such an obvious disregard for the urgency of the situation it would most certainly result in another empty pew in their church. Perhaps this is what they are actually hoping for me with me.

So, what should I do? You will tell me that my ministry lies on the internet. But my recent appeals for monthly pledges to help support the cost of my ministry and my own living expenses was not very successful. If our God is an interventionist God, he doesn't seem very keen on my internet priest idea. I am left confused, depressed about the whole thing and having bloody awful nightmares. 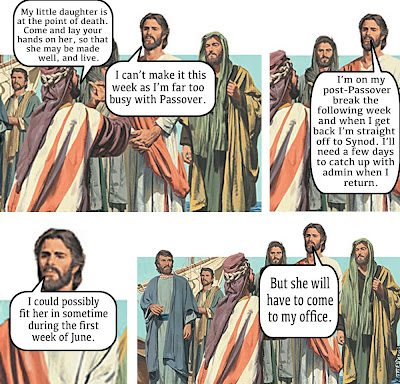