A Valentine’s Day contest by St. Joseph’s University’s Alumni Association to share the stories and photos of some alumni who met on Hawk Hill is finding the small Catholic university in the middle of a controversy that the school is discriminating against some alumni due to sexual orientation. 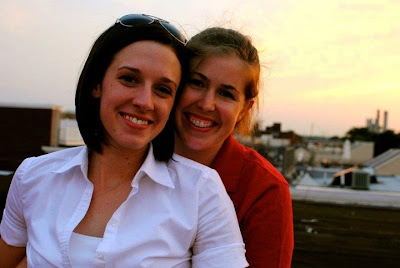 Megan Edwards and Katie MacTurk say they entered their photo and story about how they met during their senior year at St. Joe’s in hopes that they would earn the most “Likes” by Feb. 14.

They were hoping to win the "How I Met My Hawk Mate" contest and a $100 restaurant gift certificate to a restaurant of their choice.

On Thursday afternoon Saint Joe's Alumni Association responded to their original decision not to post the photo:

"Saint Joseph’s University fully supports and is in agreement with the Catholic Church’s teachings regarding homosexuality and same sex marriage. As a Catholic, Jesuit university, Saint Joseph’s is a welcoming, inclusive community. Our focus is on respect and caring for all individuals as individuals."

But by 2.50 p.m. they had caved in to pressure, much of which came from Saint Joseph's University Alumni:

UPDATE: Around 2:50 p.m. Thursday, the Saint Joseph's Alumni Association posted the "Hawk Mate" photo of Edwards and MacTurk to Facebook. It had more than 330 likes in less than one half hour.

At the time I popped over to their facebook page and clicked on "like" the figure had risen to 1145.

Thanks to whiteycat for keeping me up to date on this story.