Human beings say some downright silly things at times. Near the top of any list of often repeated twaddle I would place the phrase, "One person cannot change the world." Not only is this obviously incorrect it is the exact opposite of the truth. All change begins with one person doing or saying something and sometimes that one person's action is so unique and influential that it would be highly unlikely that the change in question would ever happen without that one person. 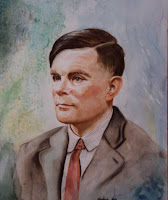 Alan Turing was a genius. In fact, he was probably the greatest English genius since Isaac Newton. During his tragically short life he was primarily responsible for five major achievements. He invented digital computing. He cracked the Nazi's Naval Enigma Code. He started people thinking about the possibility of artificial intelligence which in turn led to new thinking in neuroscience. He introduced mathematics into evolutionary theory and got a British government to apologise for the way British society and its legal system at the time persecuted and killed him just because he was gay. 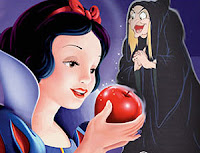 In 1952 Alan naively reported a burglary to the police. An aspect of his particular genius was that he was incapable of telling a lie or even dissembling the truth. So, he matter of factly told the police that he was living with a nineteen year man and that they had enjoyed mutual masturbation together on a small number of occasions. The police immediately forgot about the burglary and prosecuted Alan for gross indecency. At his trial where, of course, Alan pleaded guilty, he was offered the choice of imprisonment or chemical castration. He chose the latter option. This meant that he had to take estrogen tablets everyday and this led to the feminisation of his body, the shrivelling of his testicles so that his body no longer produced testosterone, impotency and, worst of all from Alan's point of view, he lost his mental ability to concentrate. He had been promised that when he stopped taking the pills that his body would revert back to how it was before he started taking them. His body didn't. On the seventh of June, 1954, Alan committed suicide, probably by eating an apple laced with cyanide, at the age of forty one.

We tend to regard hate crimes as a personal thing, concerning only the individual victim, his or her immediate family and close friends. It is only in extreme cases of organised bigotry, such as the various Nazi genocides, that we see a much bigger picture. But all hate crimes effect the whole of the society in which they take place and can often be internationally relevant. This is because any violent act effects, and in the case of murder, completely precludes, the victim's future potential. In the case of Alan Turing I suggest that his suicide (institutional murder) had a devastating effect on the potential for British science, industry and national wealth.

What if Alan Turing had committed suicide before World War II?

I think it is very unlikely that anybody would have broken the Enigma Code before it was too late. Not only would this have meant that the British people would have slowly starved and not had the resources to defend themselves against invasion, it would also have, most likely, meant that the D-Day Landings would not have been possible. What this would have meant for the people of the world, especially Europeans, is something that is terrifying to contemplate. It is also very likely that I would not be here typing this blog post.

So, we can reasonably predict various potential outcomes if Alan had taken his own life fifteen years before he actually did. Therefore, we can also, reasonably predict various potential outcomes if Alan had not taken his own life in 1954. I think it is reasonable to posit that if Alan had lived to a ripe old age, computers, as we know them today, would have been invented far earlier, that Manchester University would have become the "Silicon Valley" of the world and that Britain would be the locus of new technology development and a heck of a lot richer and more influential than it now is.

In other words, one minor act of institutional homophobia, at a time when such acts were commonplace, possibly ended up effecting the lives of millions of people in an adverse way as well as removing the possibility of goodness knows what as far as the collective knowledge of the human race is concerned.

Homophobia not only kills individual people
- it kills the future for us all. 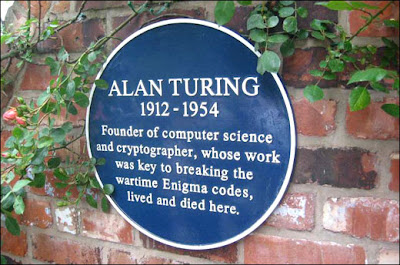