Inveterate troublemaker (on the side of the angels), Jan Nunley, is stirring it again, this time in Ireland. In the Church of Ireland Gazette's special supplement on same-sex relationships, Jan and her missus, Susan, write:

"We confess to some impatience with the fact that for two adults of the same gender to bond and celebrate a lifelong commitment remains controversial, even shocking, in some quarters.

"Ours is a marriage every bit as spiritually rich, full, holy and deeply Christian as any opposite-gender marriage we know, and more than many." The couple also argue that there are better ways of serving God than "critiquing and condemning the shared lives of two middle-aged American women of faith on the grounds of isolated Bible verses dubiously parsed."

I think the true nature of the Church of Ireland's attitude towards gay people is summed up in this quotation from the editor's foreword:

"There then follow two articles, both approaching the subject from a spirituality and experiential perspective. The first is from an American Episcopalian lesbian couple, the Revd Jan Nunley and her partner, Susan Erdey. Then follows an essay by an abstaining gay man, who is a member of the Church of Ireland but, for reasons that are understandable, writes under a pseudonym, Marcel Sanchez."

Acceptable? Not in any country that claims that it is civilised and enlightened and certainly not in an institution that aligns itself to the great releaser of captives, Jesus Christ. 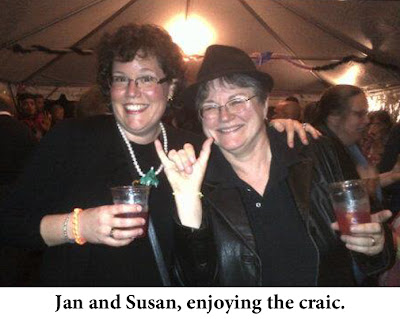