From THE LOCAL (Norway):

Per Bratteberg, who had recently retired after 37 years in the Norwegian police force, was awoken by his wife early on Wednesday morning when she heard strange sounds coming from the kitchen of their home in Mandal.

Leaving the bedroom to investigate, the 100-kilo ex-cop found a woman standing in the middle of the kitchen, having already helped herself to wine and cash.

“Wearing only my underpants, I broke into a run and pounced on the uninvited guest. She was pretty rabid, and tried everything to break free,” Bratteberg told local newspaper "Lindesnes Avis."

As the struggle brought the pair from the kitchen to the hall, the woman suddenly realized that their paths had crossed before. She began calling Bratteberg by his first name and even offered him a drop of cognac, which she assured him was her own.

When the police finally arrived at the scene, they found their one-time colleague sitting on the woman’s back in a state of near-total undress.

“They had a good laugh at the sight that greeted them,” said Bratteberg. 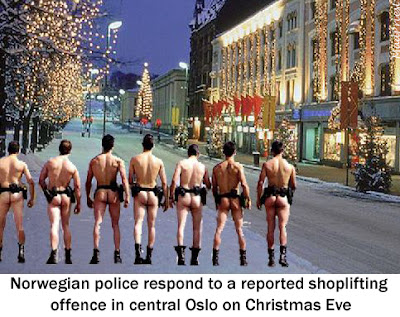