This is cartoonist, Steve Bell's take on the situation. 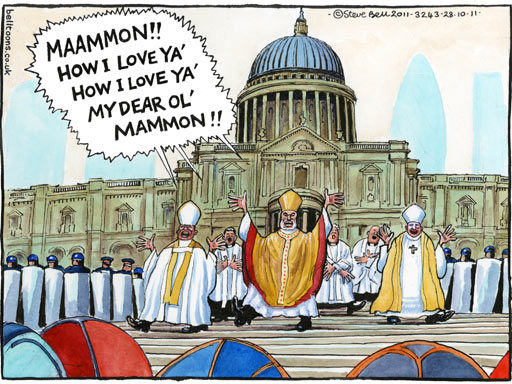 It's funny, but cynic as I am I still have to admit is unfair. The chapter of St. Paul's may derive pleasure from being important in the Church but they are not in it for the money. It doesn't matter how much money is taken on the turnstiles at the doors of the cathedral there are no big bonuses paid out to the management each year. Some of them earn a lot better than parish priests but their salaries are closer to those of the cleaners of the city offices than those of the CEOs.

And they have one huge financial problem. St. Paul's is only in a very small part a church. In reality it is mostly a museum, art gallery and concert hall. People with no faith whatsoever believe it is their right to visit the cathedral for it's entertainments, art and architecture. Unlike most public spaces of such import in England, St. Paul's is not heavily funded by the public through government subsidies and grants. On the other hand the Church of England is expected to keep the place open and an active part of the English tourism experience. To do this they have to make unpopular decisions that appear contrary to the teachings of Jesus. It is they who get it in the neck from the public and, especially, other Christians for turning the cathedral into a market place but it's not their fault. It's the fault of the English public and their ridiculous belief that the Church of England is stinking rich and that religious buildings don't cost anything to keep up. It is also the fault of our government that takes advantage of the Church's commitment to it's holy places.

No, I don't think this week's train wreck at the cathedral has much to do with money. What worries me is that it has been about something far more insidious and vile. My personal belief is that the excuses given for closing the doors were just a politically acceptable smokescreen to hide the real ideological clashes that are going on behind those closed doors.

The protest in the city is an attack on the establishment and the capitalist system that keeps those in the establishment in power and the establishment is using all the tricks in the book, clean and dirty, to make sure that the establishment is not weakened or altered by this attack. On "Have I Got News For You" this week, the conservative member of parliament and extremely rich author of chick lit, Louise Mensch, had a go at the protestors for buying cups of coffee from the nearby Starbucks. Evidently, in her opinion, this made them as capitalist as she is and guilty of hypocritically benefitting from international capitalism like everyone else whilst complaining about it. I have no idea where the protestors were supposed to buy their coffee from as all the greasy spoon caffs have been priced out of our cities by big business. So it was an unintelligent and plain daft accusation but one typical of conservatives and a normal part of their belittling, arrogant tactics against anyone who opposes them most perfectly exemplified by Margaret Thatcher's accusation that miners trying to protect their jobs was just "the politics of envy." The establishment is on the back foot and very fearful at this time.

Although most members of the Church of England are in it for spiritual and / or social reasons there have always been some individuals who use the church to get on in life, to gain political influence locally and nationally, to acquire prestige for themselves, to hobnob with the nobs and, ultimately, to become part of the establishment. Such people covert the bishoprics, archdeaconships and deanships of the Church and far too often attain to such offices. Not all members of cathedral chapters are necessarily such people but many of them are. My guess is that there is a split in the chapter of St. Paul's between those who don't want to upset the applecart of establishment, who want to protect the establishment, and those who prefer to pursue their bid for celebrity apart from the establishment, even at its expense.

It's impossible to say what the consequences of this battle will be at this moment in time. Will the "man of the people" win and lead English Christianity into a new golden age of Christian care for the poor and endless seminars and conferences? Or will the men in black win and ensure that the stuffy, private member clubs of the city of London remain the power base of the national church?

My guess is that it will be the latter and that the man of the people will end up being just as much a part of the establishment as the men in black but with better PR.

Assimilation has always been the preferred method of the establishment when dealing with high profile critics. Resistance is futile.