Jeffrey Pierce, an oblate in the Order of Julian of Norwich and long-time member of the Episcopal Church of the Transfiguration in Dallas, TX, died at 1:30PM CDT, surrounded by family and friends. He fought the good fight and accepted that the time had come to say goodbye. Rest in peace, and may light perpetual shine upon him.

Please pray for Gladys and Hans; they're good friends who are moving to Birmingham (England) and need jobs.

In Egypt a mob of several thousand Muslims from the village of Elmarinab in Edfu, Aswan province, demolished and torched St George's (Coptic) church, which was being renovated. They demolished the dome, walls and columns, after Friday prayers then went to the church depot where the lumber to be used for construction was stored and torched it. The fire lasted 2 hours, but the attack continued until 7.00p.m..

Father Salib of St. George's Church said: "The Imam of one of the village mosques, (Sheikh Sabry), called on the people to take matters in their own hands."

The Muslims also torched a large depot of electrical goods owned by a Coptic Christian, a supermarket and four Coptic homes. Muslims prevented the fire brigade from entering the village. Security forces, which were present, "stood there watching," said Mr.Michael Ramzy, a social worker at the church.

Japan has confirmed it will go ahead with its annual whale hunt. There has been a ban on commercial whaling for 25 years, but Japan catches about 1,000 whales each year in what it says is a scientific research programme. Critics say it is commercial whaling in another guise.

Crops are wilting, schools have shut their bathrooms and government officials are bathing in lagoons because of a severe shortage of fresh water in a swath of the South Pacific. The island groups of Tuvalu and Tokelau have declared emergencies, relying on bottled water and seeking more desalination machines. Parts of Samoa are starting to ration water. Supplies are precariously low after a severe lack of rain in a region where underground reserves have been fouled by saltwater from rising seas that scientists have linked to climate change.

The Dalai Lama has cancelled a trip to South Africa this week, his office said on Tuesday, accusing authorities of deliberately failing to grant him a visa in time. Desmond Tutu had invited the Tibetan spiritual leader, a fellow Nobel Peace Prize winner, to give an inaugural peace lecture as part of celebrations for Tutu's 80th birthday.

An explosion outside government buildings in Mogadishu (Somalia) has killed at least 65 people and wounded 50.

A total of 17 people were killed Monday in separate attacks in Iraq, including a hostage-taking attack at a police station in the country's western province of Anbar. 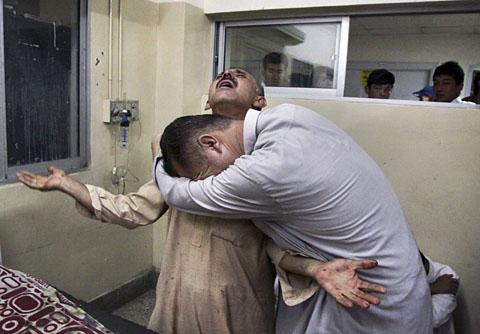