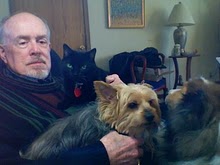 A massive congratulations to my longstanding internet friend, Jay Simser, whose blog, BAILEY'S BUDDY has just received its 200000th. hit. If there is such a thing as an archetypal blog then Jay's blog would be a perfect example. It's a diary of his life and those friends (human, canine and feline) he shares it with. Jay is a gentleman and a godly man. I count it as an honour to know him.

Posted by John Shuck
at SHUCK AND JIVE:

Congratulations to Scott Anderson. He will be Rev. Scott Anderson on October 8th when he is ordained into the ministry of the Presbyterian Church (U.S.A.) He is the first openly gay man to be ordained since the PC(USA) lifted the barrier this past summer.

The Anglican Bishop in Jerusalem, The Rt. Revd Suheil Dawani, and his family are celebrating today after finally getting permission to remain in the city after many months of legal and diplomat appeals. He spoke of his delight at finally getting the Residency Permits that as someone born in Nablus in the West Bank must have to stay in East Jerusalem, where St. George Anglican Cathedral and the bishop's offices are located.

"I want to thank all of you, my friends and colleagues throughout the Anglican Episcopal Communion and the Worldwide Christian Community, for your continued support throughout this time. It has been deeply appreciated and most encouraging knowing that we have been kept in your thoughts and prayers as we awaited this most heartening outcome."

Spare a prayer for Tim at FOLLOWING THE VOICE WITHIN who is "experiencing transcendental difficulties" and a twinge of loneliness at the moment.

A powerful typhoon has struck the Philippines, triggering floods and cutting power in the capital Manila and throughout the main island, Luzon.

Syrian troops firing machine-guns and backed by tanks have stormed the restive central town of Rastan. The tanks and other armoured vehicles entered Rastan early on Tuesday after besieging it for two days.