Rowan Atkinson has launched a blistering attack on the very people he has impersonated - clergy of the Church of England. He has accused them of 'smugness', 'arrogance' and 'conceitedness'.

He told The Times Magazine, that the roles he played as the clergy he performed with little affection, despite being raised within the Church of England.

He said: 'I used to think that the vicars I played, or the exaggerated sketches that were written about clerics, were unreasonable satires on well-meaning individuals but actually, so many of the clerics that I've met, particularly the Church of England clerics, are people of such extraordinary smugness and arrogance and conceitedness who are extraordinarily presumptuous about the significance of their position in society."

The Bishop of Bradford, the Right Rev Nick Baines, hit back at his comments: "We take the hit and I am sorry that this has been Rowan Atkinson's experience. But it takes no account of the thousands of self-sacrificial clergy who don't fit this stereotype. I would be happy to introduce him to some."

COMMENT: This is a bit rich coming from a comedian who is renowned for his arrogance and who wouldn't get out of bed for the money a Church of England priest earns in a year. Basically he's just another of those passed their sell-by date British comedians who have become themselves the rich, up their own arse tossers that they made their vast fortunes out of poking fun out of. Completely devoid of any cred anymore they have joined the Dicky Dorkins bandwagon hoping that having a go at God might get them back their "alternative" status. Like alternative has a personal fortune of 100 million pounds and drives around in an Aston Martin. Rowan Atkinson - YOU ARE A FAKE!

However, I am a bit worried that Nick Baines might not be our best choice of clergyman to persuade Mr Atkinson that the Church of England clergy are not smug and arrogant. 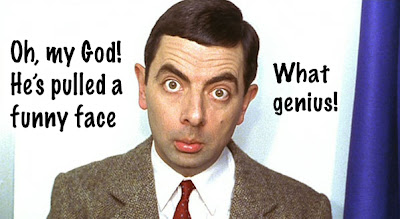