Workers with Duane Hambrick Co. said a pit bull had been hanging around the site of the former Shenango China plant which burned June 28. On Wednesday, the dog began approaching the workers and they figured out why after hearing her pups yelping from inside a storm sewer.

"I saw that she had puppies in the building," John Lawrence, a member of Hambrick's crew told the New Castle News. "I brought in food. She was starving and the puppies were taking everything she had."

Once they learned the puppies were stuck, however, Hambrick's demolition crew called firefighters who spent hours dropping hamburgers and other food into the sewer, hoping to coax the puppies to openings where they could be rescued. They even shooed the pups toward one manhole by spraying a hose into another.

There were 10 puppies at the plant in all, and they've all reportedly been adopted, along with their mother, by various people in the community or the firefighters who rescued them.

For being big tough men with big softy hearts these workers and firefighters are our... 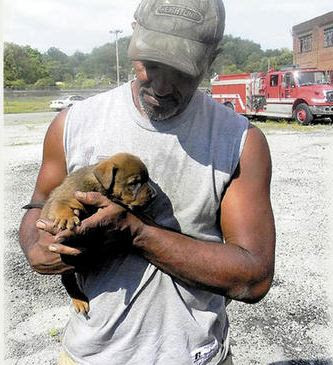 Thanks to Whiteycat for sending this
story into the MadPriest Mansion.