STATEMENT BY THE NO ANGLICAN COVENANT COALITION REGARDING COVENANT BACKGROUND INFORMATION PREPARED FOR THE DIOCESE OF OXFORD:

The analysis of the Covenant in the Rees document is consistently shallow and superficial. The Covenant is presented as minor tinkering with Anglican Communion governance, yet somehow still vital to the Communion’s survival. Even the observation that conservatives see the disciplinary provisions as too weak, whereas liberals see them as too strong seems designed as a sort of Goldilocks defence of the Covenant’s supposed merits.

Oxford’s Introduction contains links to background material, but many of the references are official pro-Covenant propaganda from the Anglican Communion Office and the Church of England. Some warnings about the Covenant are found in General Synod debate transcript, however, and the Church Times Guide is properly characterized as offering “strong arguments for and against the Covenant.”

Unlike the background material prepared by the Anglican Church of Canada, Canon Rees references neither the No Anglican Covenant Coalition ( http://www.noanglicancovenant.org/) nor its associated blog( http://www.blog.noanglicancovenant.org/). The Coalition’s website includes all the references cited in Introduction to the Anglican Covenant Debate and more than 150 other articles. Ironically, Canon Rees does not even cite thoughtful pro-Covenant resources, such as the series being published by the U.S. magazineThe Living Church (http://www.livingchurch.org/), which has offered a far more coherent defence of the proposed Anglican Covenant than anything seen from either the Church of England or the Anglican Communion Office.

Fortunately, members of the Oxford Diocesan Synod have time to educate themselves in preparation for the forthcoming Covenant debate. Members of the No Anglican Covenant Coalition encourage them to visit our website and search for other materials, both positive and negative, regarding the Anglican Covenant. The decision about the Covenant to be made by the Church of England is too important to be made lightly.

COMMENT: Really, you expect better from the diocese of Oxford, a part of the Church of England that is traditionally known for intelligent comment and honesty. But these are embarrassing days for Anglicans in my country with shameless politicking going on in the House of Bishops that would make the president of a new Russian republic blush. And it is so hypocritical. I am 100% certain that if our government was discovered to be disseminating such biased hogwash to the public then Rowan Williams would be one of the first to stand up in public and castigate them. But here he is acting like a chief whip trying to force liberal MPs to vote for the Conservative manifesto on the National Health Service. How far Williams is prepared to go to manipulate voting in his favour was shown by the paddy he threw when Bishop Pete Broadbent questioned the constitutional validity of the appointment of Bishop Trevor Willmott to the chair of the C. of E's business committee. Fortunately, in that case, the bishop of Willesden had the balls to stand up to Williams and the bishop of Dover had the decency to be embarrassed by his shoe-horning and withdraw his nomination. But the bishops are not going to break ranks on the Covenant because they perceive it as a way of gaining control over the priests and laity of the church and imposing a Roman Catholic style hegemony on the Anglican Communion in general and their own dioceses in particular. We know there are plenty of bishops with huge doubts about the Covenant and who are worried that its imposition will change the very essence of the Anglican faith, all that makes it a unique witness to the gospel of Christ. That these bishops are too scared to stand up and state their opposition loudly and clearly is no surprise in such a preferment obsessed organisation. But you would have thought they would have the bollocks to insist on a high level of fairness in how the debate at Diocesan level is set up. But, evidently not. As I said, it's all very embarrassing. 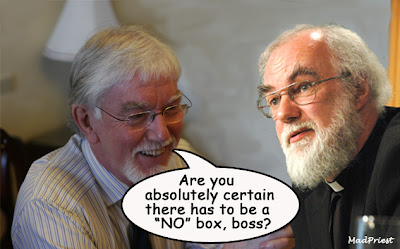