From THE HOT BUTTON: 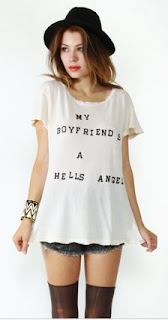 The Hells Angels are suing Hollywood fashion house Wildfox for using their name on a T-shirt, the Los Angeles Times reports. The offending item is emblazoned with the words “My boyfriend’s a Hells Angel” and features a pair of angel wings on the back. Both infringe upon the Hells Angels’ trademark name and logo, according to the motorcycle club’s attorney, Fritz Clapp.

“We bring these lawsuits from time to time not just to punish but to educate,” he told the Los Angeles Times. “Somebody thought erroneously that Hells Angels is a generic term.”

The U.S. Department of Justice describes the Hells Angels as an OMG (outlaw motorcycle gang) of roughly 800 members that “pose a criminal threat on six continents.”

Both Jesus Christ, son of the living God, and the ghost of Che Guevara are rumoured to be taking a serious interest in this case. If the motorcycle gang is successful and win the case, a whole load of evangelicals and reds will probably find themselves up before the judge.