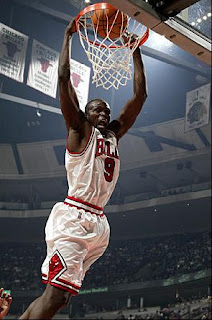 I have very little interest in basketball. In fact, the only games I have ever watched were on the Harlem Globetrotters' cartoon series. So, it's a bit strange that one of my main heroes in life is the Chicago Bulls player, Luol Deng, a man who I have never seen doing what he is famous for doing, namely playing basketball.

There is no doubt this man's athletic prowess is impressive but it is not that impresses me most about him. The real slam dunk, as far as I am concerned, is the way he says "Thank you."

Born in South Sudan he had to flee from the civil war in his country with his family as his father was a parliamentarian. They ended up in Egypt and were eventually granted political asylum in Britain where they were housed, as is so often the case, in Brixton (not the safest and most pleasant part of London to say the least, although it does have a multiethnic buzz that can be exciting). At the age of fourteen, due to his burgeoning basketball talents, Luol moved to the States to play the game at the Blair Academy in New Jersey. He is now, at the age of twenty six, one of the highest paid basketball players in the world.

All that, in itself, would make the young man a role model for triumphing over adversity, but it's what Luol has done with his fame and fortune, and the humble way he has gone about it, that blows my socks off.

From WIKIPEDIA: Deng is involved in numerous charities, such as the UK children's charity School Home Support. He has been noted for his work on behalf of the Lost Boys of Sudan and other refugees. During the summers of 2006 and 2007, Luol went to Africa, Asia and Europe with the NBA for their Basketball Without Borders Tour. He is also a spokesperson for the World Food Programme.

"He really does epitomize everything I had hoped for as a person and a basketball player," general manager John Paxson said. "I think it's one of the reasons we've gotten to the level we're at this year. I'm truly proud of him. I think the world of him as a person and as a player."

Following the 2009–2010 season, Deng made a highly publicised first return to his native Sudan.

All of this is brilliant, but there is one thing above all else that has given him hero status in my book. Although he didn't live for long in England, he has spent millions of dollars on UK charities, to say thank you for our giving his family refuge. He also became a naturalised, British citizen back in 2006 and will be leading our basketball team during the next Olympic Games.

You know, we don't deserve such an honour as we treat refugees like shit most of the time in my country. So Luol's actions fill me both with pride and embarrassment at the same time.

Here's a clip of Luol talking on the BBC yesterday evening:

Whenever, I hear about this man and what he has done with his life and the way he has made the lives of countless other people much, much better, tears well up in my eyes. I am not joking, they do. I think this is because that although we talk to the cows come home about the Kingdom of God being both in the future and here on earth now, to be honest, you rarely come across the reality of this great claim. For me, Luol Deng drags the Kingdom of God around behind him wherever he goes and in doing so, gives us all a glimpse of how life should be lived. Good on him!

And here's a tip for you. Ring your bookie and put a small bet on Great Britain winning the Basketball gold at the Olympics. The odds you will get will be phenomenally high, especially if you live in the United States. But you never know, it might just happen. Sometimes, very occasionally, life is like the movies and it's people like Luol who can make it happen.

Here's a great vid from 1975 that I have always adored. This basketball story is as good an excuse as any to post it.

And finally, the photoshop: 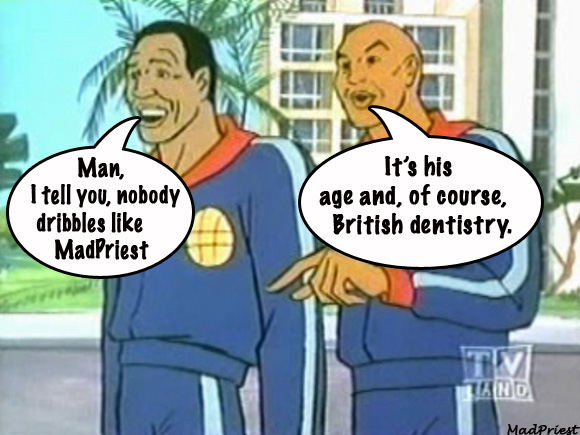