The Church of England could be virtually extinct in 20 years as elderly members die, an Anglican leader has warned. The average age of worshippers has risen to 61 as the Church has failed to attract younger followers, The Rev Dr Patrick Richmond, from Norwich told its National Assembly.

The Rt Rev Nick Baines, the Bishop of Bradford, spoke of parishes that were 95 per cent Muslim.

"This is a fantastic opportunity. It is a challenge, yes, but it’s an opportunity to rethink what it means to be a Christian community. We often ask Muslims to learn what it is to be a Muslim as a minority culture. Maybe we could benefit from learning some of the same lessons in some of our cities," he said.

COMMENT: I've suggested all along that we should execute anybody who leaves the Church. It works for the Muslims, I can't see why it shouldn't work for us as well. Oh, and we should repeal the silly Catholic Emancipation Act and make Methodism a capital offence. What's the point of being the Church Established if we can't force people into becoming  Anglicans? 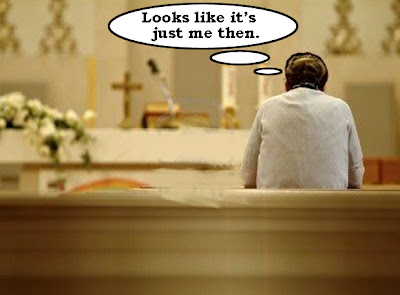