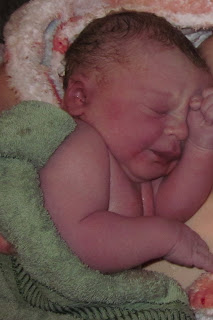 The wait is over. At 2.25 this morning (English time) Heather gave birth to a baby boy "after a wonderfully swift, calm and straightforward - if painful - home birth."

And the rains came! The first rain since Mardi Gras, March 8. Thanks for the prayers. Thanks be to God.

At FINDING LIFE HARD, Liz has posted the sad news that her mother in law died on Sunday morning.

Please pray for my mother who has an appointment with a specialist tomorrow to check for colon cancer. She is very frightened.

Amina Abdallah Araf al Omari, an out lesbian blogger from Damascus, Syria, was seized by three men earlier today, her cousin wrote on her blog, 'A Gay Girl in Damascus', earlier today:

Amina told the friend that she would go ahead and they were separated. Amina had, apparently, identified the person she was to meet. However, while her companion was still close by, Amina was seized by three men in their early 20’s. According to the witness (who does not want her identity known), the men were armed. Amina hit one of them and told the friend to go find her father.

One of the men then put his hand over Amina’s mouth and they hustled her into a red Dacia Logan with a window sticker of Basel Assad. The witness did not get the tag number. She promptly went and found Amina’s father.

The men are assumed to be members of one of the security services or the Baath Party militia. Amina’s present location is unknown and it is unclear if she is in a jail or being held elsewhere in Damascus.

Later, it was updated:

I have been on the telephone with both her parents and all that we can say right now is that she is missing. Her father is desperately trying to find out where she is and who has taken her.

From other family members who have been imprisoned there, we believe that she is likely to be released fairly soon. If they wanted to kill her, they would have done so.

That is what we are all praying for.

Japan has more than doubled its estimate of radiation that escaped from the tsunami-hit Fukushima nuclear plant in the first week after the disaster. Japan's nuclear safety agency also said meltdowns took place in three reactors more quickly than earlier believed.

Fighting spread to Kadugli, a city in a heavily militarized part of Sudan, on Monday, as the northern Sudanese army appeared to be trying to disarm militias and forces aligned with southern Sudan.