It’s been nearly a month since Bishop Bill Morris of Toowoomba in Australia was dismissed from office by Pope Benedict XVI. Now Cardinal George Pell of Sydney, has given his first in-depth interview on the controversial sacking.

“Well, it was a tragedy. It should never have come to this. Rome was very patient. You could say the dialogue had continued on for 13 years and unfortunately Bishop Morris felt unable to give satisfactory clarifications. He’s a very good man. He had a lot of pastoral strengths. He’s got a lot of good points. He’s done of lot of good work. He’s got quite a strong following in the diocese. But the diocese was divided quite badly and the bishop hasn’t demonstrated that he’s a team player.Catholics stand with the Pope as the successor of Peter and his role is to strengthen his brothers and to defend the apostolic tradition, and it’s now Catholic teaching that women cannot be ordained priests. That’s not an optional belief; it’s now part of the Catholic package,” said Cardinal Pell.

As for critics of the Pope’s decision to sack Bishop Morris?

“There’s been a predictable chorus from a minority but such is life. You know, life moves on, but also I think it will be a useful clarification for people that Catholic doctrine is there to be followed and bishops take promises to defend the integrity of Catholic teaching." 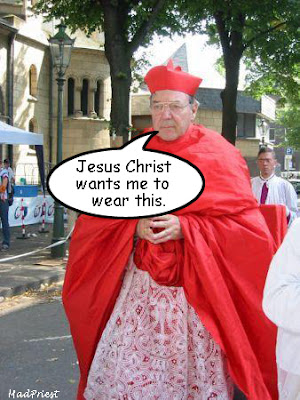