From EXPRESS AND STAR:

A grey pony shot to fame this week when CCTV pictures were released which showed it trying to board a train in North Wales. Now more pictures have been released which show the pony waiting in Wrexham Maelor hospital. The owner of the grey pony arrived at the accident and emergency department, asking if the animal could be treated for an infection, but he was turned away.

According to a report in the North Wales Daily Post, the pony is a mare named Ruby and has also been spotted at Yates’s wine bar in Wrexham, where staff give her food and water.

A spokesman for the RSPCA said: “The horse and owner have been located. The RSPCA has visited and checked on the horse’s welfare. We understand that the local authority has been talking to the owner, voicing their concerns.” 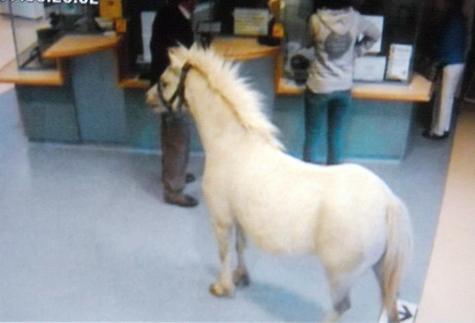