I'm back for more prayers. They diagnosed me (via the 2nd mammogram, and ultrasound) w/ "calcification", and want to biopsy me. Damn.

Posted by Lois at RAMBLINGS WITH LOIS:

I have only just learned that my Aunt Ronnie died on March 26th. On top of that, her son Robert died on June 24, 2009, and I didn't know it, and his wife, Marie pre-deceased him on September 26, 2006. How did my side of the family drop off the radar of Aunt Ronnie's side of the family so that we knew nothing about the deaths of people with whom we had been so close when we were kids and young adults?

Details on how to access Chin Wag can be found in the right hand sidebar of this blog.

Ammar Qurabi, the head of the National Organisation for Human Rights in Syria, said on Tuesday that his group had documented about 1,000 names of people who were detained across Syrian provinces in door-to-door raids since Saturday. He said many other people had been reported missing.

Posted by Graham at DIGGING A LOT: 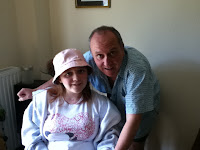 I’ve blogged before on a family friend who had a tragic accident over 6 months ago. For several weeks her life hung in the balance. Then there was hope. Her prognosis remains uncertain but each day brings progress. She is able to come home at weekends. There is some speech but greater comprehension. There is the ability to sit up unaided. There is the ability to eat and lots more things that were taken for granted a year ago but seemed doubtful only weeks ago.

We saw her a few days back. There is something more: love incredible love. Her parents are realistic about where she is at but at the same time see only Grace. Seeing her made us incredibly happy and gave us hope. It is good to have a friend back.

Hamas officials said Monday that the Islamist militant group would honor an unofficial truce with Israel after forming a new unity government with Palestinian rivals from the West Bank.