The NEW STATESMAN has posted the complete transcript of Jonathan Derbyshire's interview with Sam Harris back on 11th. April, 2011.  It is interesting.

Harris is just another self-proclaiming messiah who seems to believe that if you make a statement forcefully enough and then move quickly on to the next point, then what you have just said is a fact.

For example, his argument against the truth claims of religions is that science has disproved them. This is just not true for one simple reason - unless you know absolutely everything there is to be known, including the fact that you know everything, any truth claim you make is provisional, and that goes for both scientific claims and theological claims. We can say that, given the information in our possession, the earth appears to go round the sun. What we can't say is that it is a definite fact. It could be that from a different perspective the sun goes round the earth or, more likely, that nothing goes around nothing. Maybe, scientists in the future will discover that all is illusion or that we create our own reality - they are long shots (I do not personally think them very likely), but they are possibilities, even within our present day grasp of mathematics.

Furthermore, Harris arrogantly believes that scientific discovery takes precedence over everything else. But  his is an arbitrary hierarchy that favours his wage packet and which is very much open to being rejected. For example, if we want to travel to the moon or increase food production we would be wise to take scientific claims on these matters very seriously. But if we want to be happy, no matter how much knowledge scientists may have about the working of our brains, we would be wiser to ignore scientists who, on the whole, can be a pretty unimaginative lot. A better choice for guiding us in our pursuit of happiness would be a creator of stories or a mystic.

But it's when he starts talking about morality that Harris shows his lack of philosophical expertise.

I think there are universal principles that we should want to understand, but that are not necessarily good for us. We could recognise universal propensities which current cultures can't fully eradicate, which we would want to eradicate if we could. Let's say, a tendency for tribal violence. Or racism. Let's say all cultures are, at bottom, slightly xenophobic, or greatly xenophobic, and there are just degrees of the problem. I think our only reasonable goal now is to try and build a global civilisation that can allow 9 billion people ultimately to flourish, so xenophobia is something that we want to get rid of. So the question for science is: what's the optimum way to raise children, create political institutions and to cooperate with one another so as to mitigate the congenital problem we all have with xenophobia, regardless of culture?

It sounds reasonable, but only because we are all informed by the Golden Rule, which in turn is given validity by religion. It is, in fact, a very dubious take on things. Take another look at his statement: "I think our only reasonable goal now is to try and build a global civilisation that can allow 9 billion people ultimately to flourish, so xenophobia is something that we want to get rid of."

The first half of this sentence is arbitrary. The obvious question it begs is "Why?"

The second half of his statement most probably defeats the moral claim he has just made. If the only reason to act morally is to bring benefit and continuation to our species then, at this moment in time, bloodthirsty tribalism and nationalism probably should be encouraged. Decreasing the population of the world by about 75% would give our species (and all the other species we share the planet with) a far higher chance of long term survival. A few major world wars would help us to achieve such an aim and within a timescale that might just save us from the global extinction the 9 billion human inhabitants are so intent on making a reality in the not too distant future.

You cannot get rid of god unless you create a new god, because somebody has to decide what is morally right and what isn't. Someone has to prioritise. Someone has to choose what it is that has to be sacrificed for the common good. Someone has to decide what the common good actually is. To be quite honest, if we must have a human god, then I would rather we chose a fantasist, such as Terry Pratchett, over a scientist any day of the week. Don't forget, yesterday we celebrated the 25th. anniversary of exactly what happens when we allow scientists to be our gods.

It is very possible that human beings made up all the rules of morality that we regard as self-evident or from god. If they did it was for a reason and most anthropologists would, I'm sure, agree with that. Maybe we all suspend disbelief for the "common good" but if this is the case then the "new atheists" are playing with fire. They are saying that scientific truth is more important than the common good and that all must be sacrificed for it.

The only reason why human beings are still acting, some of the time, according to the Golden Rule is that most of us, including the new atheists, are inherently attached to the religious thinking of our forebears. If Sam Harris, and his tediously pedantic and fact based crowd, have their way, this situation will soon pass and then people (some of them with really big guns) will ask themselves the question, "Why," and will, quite reasonably reply, "Why not?"

How do I know this to be true? Because this is exactly what has happened in the past. Religious people can be cruel but, if they are truly religious and not just pretending, then they do have to go through the process of justifying their actions in accordance with their faith before invading the Holy Land. Cruel atheists don't have to go to such time consuming trouble. They can do exactly what they want for whatever reason they want whenever they want.

Ah, well, at least the end will come quicker under the new dispensation. 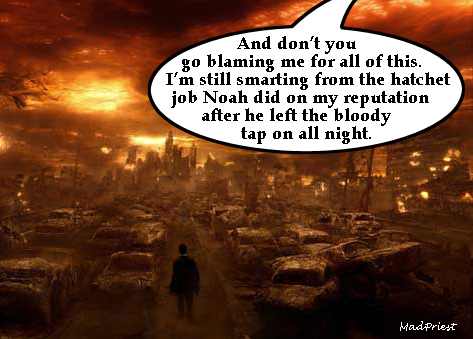