This morning, on checking through the posts of the bloggers in THE NEIGHBOURHOOD, from the weekend just passed, I came across an inordinate number of bits of drivel going on about Easter Day and Christ being raised from the dead and all that. Every single one of these posts contained revisionist nonsense about joy and celebration. Pah! As if there isn't enough delusional happiness in the world already.    I was disgusted. Many (most likely, all) of these posts were posted by bloggers who are obviously going to burn in hell for all eternity even if they were to repent of their sins and unfeignedly believe the gospel (that's the Book of Deuteronomy for those of you who belong to the wrong sort of church). What on earth have they got to be joyful about?

Enough of this nonsense, already! We were not put on this earth to have fun and I strongly suggest you all go over to the GAFCON blog and read Father Christian's Easter sermon in which he clearly explains the true meaning of Easter. You should PTL that you have this courageous guardian of orthodoxy to whip you back onto the path of self righteousness  every time you decide to run off into the sunny, green pastures of iniquity to enjoy yourselves. 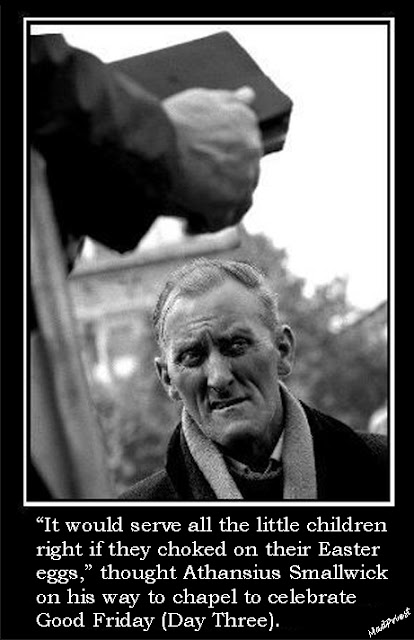 I am, of course, a huge fan of the saintly, Father Christian. He is the nearest thing we have to perfection in this part of the blogosphere. But he is not quite immaculate. I am afraid that we have to face the fact that sometimes he can be too nice and I think that he may be guilty of this in his Easter message. For the real thing you need to harken to the words of the Head of the Family Firm.

From THE TELEGRAPH (Australia):

Anglican Archbishop of Sydney Dr Peter Jensen used his Easter message to oppose euthanasia, saying there was no such thing as a dignified death.

"There is nothing dignified about the pain, helplessness, loss and anxiety of death. It is undignified," he said.

"It takes God's noble, glorious creation of a human being and turns us back to dust. It strips us of achievements, history, honours, dignity and relationships and destroys our bodies."

I think we can all see what Bishop Jensen is scared shitless about.

It's a shame really. If the bloke had spent a bit more time being a pastor among his flock, in stead of spending all his time building up his family's power base, flying around the world in what appears to be a one man mission to completely get rid of the ozone layer above Australia, and dabbling in dodgy financial investments, he would have discovered that death is often extremely dignified considering the circumstances. If he had spent a bit more time studying the Gospels, in stead of the stockmarket, he would have come across the glorious news that because God raised Jesus from the dead our bodies will also be raised from the dead. It's only the material stuff we've acquired during our lifetimes that we won't be taking with us, as far as I can see.