Tens of thousands of people took to the streets in cities across Syria on Friday to call for current president Bashar al-Assad to step down. At least 90 civilians were killed by security forces. Another 80 people were injured in the clashes. It was the bloodiest day in a month of escalating demonstrations.

Soldiers patrolled the streets, cities were under curfew and doctors counted the dead yesterday in northern Nigeria as an election trumpeted as the fairest since the end of military rule ended in deadly riots. Supporters of losing presidential candidate Muhammadu Buhari went on the rampage. Hundreds of people are feared dead as churches, mosques, homes and shops have been burned. Despite a heavy police presence pockets of rioting that began on Monday flared again yesterday. The Nigerian Red Cross said yesterday that nearly 400 people had been wounded.

Almost 300 Roma have fled their homes in Hungary in fear of far-right vigilantes. The Red Cross evacuated the Roma from the village of Gyongyospata after a paramilitary group called Vedero , or Defence Force, organised a training camp and planned exercises there over the Easter weekend.

Two Tibetans have died in a security crackdown on a Buddhist monastery in southwest China. Authorities have sealed off Kirti Monastery in Sichuan province and ordered a re-education programme there following unrest triggered last month when a young monk set himself on fire and died in an apparent anti-government protest. 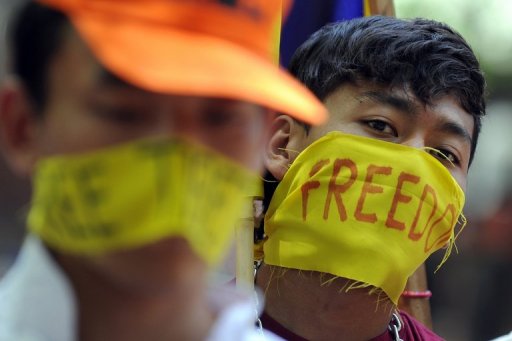 Thai troops have used cluster bombs and poisonous smoke in the armed clashes on Saturday morning over the border disputed area at the Ta Mon Thom temple and Ta Krabey temple in Oddar Meanchey province. This is the second consecutive day of military clashes between Cambodian and Thai troops over the disputed border areas after Friday's clashes claimed at least 6 lives of both sides' troops and injured over a dozen, and forced thousands of both sides' locals to flee their homes.