Please pray for MadPriest's friend, Kevin, who is attending the funeral of his mother, Shirley, today.

The following was posted last Friday so we pray that the experience was satisfactory and helpful.

This weekend, as part of my exposure therapy, I will be returning to the place where my partner and I were attacked. I have not stepped on that university campus since that day. I once tried going on my own but didn’t get to the front entrance without starting to heave. This time my therapist will be with me and one of my closest friends will be nearby, available for support. I am not sure why this is such a huge hurdle for me. Perhaps the biggest. We have been working on this for weeks in therapy. It is just a place. But even the thought of it has my heart pounding in my chest. Any good thoughts, positive energy and/or prayers would be appreciated.

If I remember right, the attack on 8th Day and her partner was the most horrific event ever written about on the neighbourhood blogs.

Dianne at FORKS OFF THE MOMENT is having a tough time at the moment coping with that nasty old black dog. She's coping but please pray that she maintains the strenth to continue doing so.

Linda, our missionary who worked in Zambia, passed away yesterday afternoon (14th. April) in her beloved Zambia. 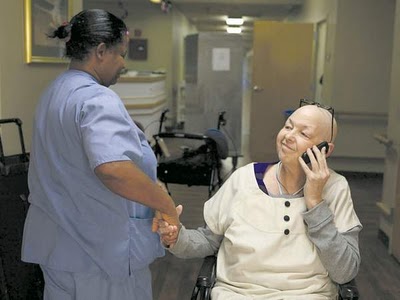 Posted by Sister Hedwyg at
AN INQUIRING AND DISCERNING HEART:

On Wednesday, I had my second appointment with the new rheumatologist, who turned up an active chronic Epstein-Barr infection. So that goes onto the diagnosis list, along with Ehlers-Danlos Syndrome, Chronic Fatigue Syndrome, Proportionate Short Stature (yeah, I’m Little), and a severe Vitamin D Deficiency. I’m learning that there are physical changes in the brains of PWCs (persons with CFS), a reduction in grey matter and increase in white matter — so the “brain fog” and other cognitive effects are not only real, but are based in physical matter. This terrifies me. I’ve learned that each recurrence of EBV infection increases one’s likelihood of developing lupus later in life.

The rheumatologist has recommended to my primary doctor that she send me to a specialist in infectious diseases, and I’m expecting to have my immune system checked out as well. I need a new echocardiogram — these are recommended for EDSers to have annually — and a bone scan. It’s all just so much stuff.

Posted by Tracie at
ON HOLLADAY - FLORIDA STYLE:

My friend Mike R. lost his little baby girl Buttons (his cat) today. I'm not sure what to; apparently she was sick and having seizures, and he had to let her go.

Posted by Dino at
FACING THE MOUNTAIN:

After the horrific fires of two years ago when just about everything on the Hottentots Holland mountains was burnt between Gordon's Bay and Jonkershoek we'd have hoped we might have learnt our lessons. Apparently not! Word locally is that the Erinvale estate had a 'controlled' fire earlier in the week and today's fire is a result of a flare up from the controlled fire. Ten houses have been destroyed so far and many farms have been evacuated. Also, the southeaster is really pumping hard which serves to fan the flames as well as pushing the fire over the mountain towards Stellenbosch.

At least 45 people are said to have died after a powerful storm whipped up tornados across parts of the southern and central United States over three days. Tornados and thunderstorms hit North Carolina on Saturday, knocking out power, flooding streets and uprooting trees. A state of emergency has been put in place for the state.

At least 18 people were killed and 155 injured in south China's Guangdong Province as of Monday after hailstorms and strong winds rocked the region, flood control authorities said. Winds as strong as 164 km per hour, accompanied by hail and lashing rain, battered the cities of Guangzhou, Foshan, Zhaoqing and Dongguan on Sunday. The storms have affected over 3,200 people so far, forcing 380 of them to evacuate their homes.

Increasing numbers of casualties are being reported in Misratah as Colonel Moammar Gaddafi's forces continued bombarding Libya's third city with shelling and sniper fire. One senior medic estimated a death toll as high as 1,000 since the last rebel foothold in the west of the country came under attack six weeks ago.

Syrian forces killed 8 protesters overnight in the central city of Homs in confrontations after the death of a tribal leader in custody.

Posted at THE TELEGRAPH:

Yemeni forces loyal to President Ali Abdullah Saleh have used water cannon and tear gas to disperse protesters in Sanaa. Thousands of anti-government demonstrators were overcome by tear gas during the clashes when they marched outside their protest zone in the streets near Sanaa University. Security forces reportedly fired on the protest march, wounding at least 22 people.

Posted at THE LOS ANGELES TIMES:

Kabul, Afghanistan — An insurgent dressed as an Afghan soldier opened fire Monday inside the Defense Ministry, killing two soldiers in an unsuccessful attempt to assassinate the Afghan and French defense ministers. The attacker was also armed with explosives but was shot and killed by Afghan soldiers before he could detonate the bomb.

An Israeli teenager wounded when a Palestinian rocket hit a bus has died of his injuries. Daniel Viflic, 16, was on a school bus in southern Israel on 7 April when it was hit by an anti-tank missile fired from the Gaza Strip. 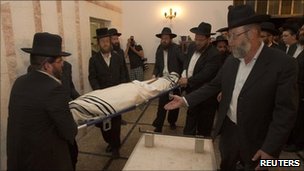 Posted by Sharon at FROM HERE TO INSTANBUL:

It’s finally happening. We’re going home. Cristy’s blood test results this past week were stellar – better than they’ve been at any time in her life. The doctor gives her a success prognosis of 90-95%. This is great news – obviously.

A strong caveat continues to exist though. For the first 100 days of her transplant, she must maintain a certain level of isolation, no physical contact with anyone, the foods she eats must still be strictly controlled, and she must do everything she can to avoid any kind of infection or illness.

One of the best parts over the past 30 days or so has been that she has needed absolutely no pain meds and is pretty much off all of the meds she was on before the transplant. She’s on a variety of anti-fungal, anti-viral, and anti-infection drugs right now but is on schedule to come off those drugs over the next six months.

With all this in mind, we expect to be home next week some time, barring any complications in her ongoing recovery.

Posted at NOTRE DAME NEWS
(sent in by Whiteycat): 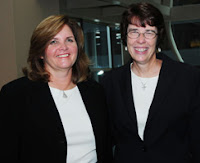 Sister Mary Scullion, R.S.M., and Joan McConnon, co-founders of Project H.O.M.E., an organization devoted to ending homelessness in Philadelphia, will jointly receive the University of Notre Dame’s 2011 Laetare Medal, the oldest and most prestigious honor given to American Catholics, at Notre Dame’s 166th University Commencement ceremony May 22 (Sunday).

“In their work for the homeless of Philadelphia, Sister Scullion and Joan McConnon have splendidly answered the Gospel summons to brotherly love,” said Notre Dame’s president, Rev. John I. Jenkins, C.S.C. “Serving the unsheltered Lord on the streets of their hometown, they have provided an example for others to serve likewise in cities worldwide.”