Posted by Suem at SIGNIFICANT TRUTHS:

News today that Nick Holtam is to be the next Bishop of Salisbury. He will be the first bishop married to a divorcee to be appointed, although I think there are those who have married divorcees after their appointment. Nick Holtam is Liberal Catholic, a member of Inclusive Church. He supported Changing Attitude in holding their 10th anniversary at St Martin's in the Fields and welcomed Gene Robinson to attend.

COMMENT: It is always good news when a good man is chosen to lead God's people. Mind you, it was only to be expected in this case as the Diocese of Salisbury is renowned for choosing Christ-centred priests for its episcopal throne. However, nowadays we can take nothing for granted (see: Appointment of Rowan Williams as Archbishop of Canterbury) and so must be grateful that the Church of England has not yet been hijacked completely by the narrow minded and their strange bedfellows, liberal wimps and appeasers.

Although it should not be, the big news here is the demotion of a priest to the episcopacy who is already married to a person who has, in the past, undergone the painful, human process of going through a divorce. Of course, in the Kingdom of God, this should never be a big deal and in this particular case, to make a song and dance about it, is ridiculous. I understand the future first lady of the Diocese of Salisbury, was married and divorced as a teenager. Heck, we all make mistakes - remember, Jesus, the dog and the crumbs under the table? The vote last year to allow the episcopal office to include people in such situations was absolutely right, just and downright Christian. 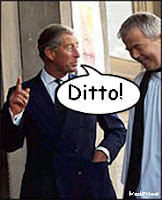 Now that we have bishops (a person in authority over us) who are in second marriages (at, least for one of the partners) there is no reason why questions regarding marital history should not be removed from clergy application forms and banned from discussion in interviews. If you have been previously married you need to get special permission from the Archbishop of Canterbury to be ordained. This permission follows a lengthy and intrusive enquiry. That should be enough. If you have been judged to be of the moral character necessary in a priest by the highest representative of the national church then I do not believe anybody else in the church, at any level, has the right to enquire further about past marital circumstances or make negative decisions concerning the employment of a priest who has been judged worthy under, one hopes, the influence of the Holy Spirit. It is particularly vile to pry into the sexual past of the person in the partnership who is not being considered for holy orders. Such abusive questioning is not allowed by law in secular employment situations. This is another example of the Church having to catch up with the moral superiority of much of the world outside its sacred ring fences.