The link to the article from which the following has been extracted was sent in by Wade who is "proud to have been on the discernment group for this young man."

Posted at WALKING WITH INTEGRITY:

My uncle wanted to make chicken and dumplings. A simple enough task. As I watched him slowly write out the grocery list in his precise architect’s script, however, I knew completing that task would take much of the day’s energy. Recovering from spinal meningitis decades into his fight with HIV/Aids simple tasks were no longer easy. I sadly mulled this over as I drove to the store with his list. At which point, as always, my uncle made me smile. His meticulous list was arranged to the specific floor plan of the store. Pity ain’t gonna stick to that.

A few years ago my uncle became a confirmed Episcopalian. My memory is of him explaining that it was not a sudden decision, but one he had known for a long time. He talked about Integrity, not in any great way but by the simple fact that Integrity existed. That it had actual purchase in our church’s polity and this meant that the Episcopal Church was a place where he could worship God with his full self. Decades of the Episcopal Church being in the background had made it the place he knew he would go when he was ready once again to enter into a churched relationship with God.

Our church, our church has its problems, but if the results of one of our most darkest deeds, our party to the enslavement of our brothers and sisters in Christ, is that a former slave parish in the deep south is now a place a gay white man can finally worship God in truth, then there is overwhelming hope amidst our current problems. 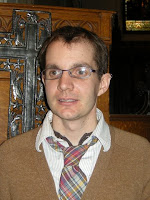 COMMENT: Normally such Christ-inspired words would automatically merit the author being given the accolade of "Brick Of The Day." However, OCICBW... is regularly visited by many gay men and style gurus such as KJ, and that tie and the way Ben is wearing it, just do not pass muster. But, apart from this one, albeit unforgivable sin, this young man is a shining example of the gospel infused mission of his church and gives us all hope that, as it has been promised, one day we will overcome. Wade is thoroughly justified in being proud of being part of the process that has given Ben the opportunity to minster to the people of God.