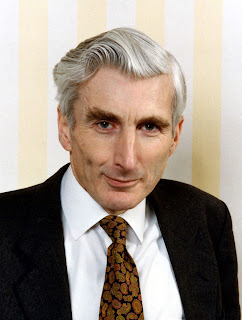 THE GUARDIAN has posted an interview with Martin Rees, a scientist who has just been awarded the £1 million Templeton Prize.

From the outset, Rees is very stroppy, even by top scientist standards.

Mind you, Ian Sample seems intent on upsetting him from the outset as well.

Ian Sample: Congratulations on the award.

Then, after Rees has explained very clearly that he is a scientist and not a philosopher, Sample insists on asking him lots of philosophical questions. This forces the reluctant Rees into making clichéd responses that The Guardian then posts, no doubt to be lapped up by philosophically challenged antitheists.

Firstly, Rees insists on repeating the hoary old chestnut that science and religion are two completely different things, in the same way, he suggests, that science and aesthetics are two different things. But, of course, they are not. All "orthodox" religion makes claims about reality and non-reality. If science is the study of that which exists and religion is different to science in the way Rees suggests, then god(s) is/are not a reality. A religious apologist who uses this "two different things" gambit in order to snuggle up to atheistic scientists is basically denying the existence of god(s).

The second un-thought through comment Rees makes is this:

IS: Why don't you believe in God?

MR: I don't think I can answer that.

IS: You must have thought about it.

MR: Yes. But there's nothing very much I want to say about that. I suppose one thing I would say, from my BBC lectures, I think doing science makes me realise that even the simplest things are pretty hard to understand and that makes me suspicious of people who believe they've got anything more than an incomplete and metaphorical understanding of any deep aspect of reality. And also I see human beings as not the culmination, but only a stage in the marvellous unfolding of evolution, because the timeline ahead is as long as the time that has lapsed up to now. Those are respects in which my professional interests affect my response to dogmatic religion.

This is an example of how to destroy your own argument in the very making of your argument. What Rees has learnt through doing science should make him almost as sceptical about science as religion (allowing him a bias towards science as he is a scientist and we all champion our own causes). It is my study of science that has led me to the belief that God is, not only a possibility, but a probability. I've explained my reasoning for this conclusion of mine before (many times), so I won't bother you with it again.

You know. I think my continued determination on this blog not to divorce religion and science is worthy of a Templeton Prize. I could do with a million pounds right now. If you lot would like to launch a campaign to get me it the next time it is handed out I promise that I will buy each of you a pint of beer should your lobbying be successful.