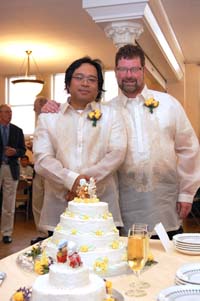 In a split decision, a Presbyterian Church (U.S.A.) panel on Monday acquitted the Rev Erwin Barron, a minister married to a partner of the same sex as himself, who faced charges of violating the Church constitution. The panel of the Presbytery of the Twin Cities Area voted 3-3 after a trial at Oak Grove Presbyterian Church. The decision fell short of the two-thirds vote required to convict the Rev Erwin Barron.

A complaint was filed against Barron after he married his gay partner, Roland Abellano in 2008, during the few months that same-sex marriage was legal there.

Shortly after the marriage, Barron wrote several commentaries weighing in on the ongoing debate over homosexuality within the PC(USA) – the largest Presbyterian denomination in the country. He suggested that Presbyterians not begin with the Bible when addressing the issue.

"In our debates in the Presbyterian Church over homosexuality, if we begin with the Bible, we will likely reach a polarised stalemate," he wrote. "Bible discussions are too often divisive. When we begin with the Bible, we are not beginning with a natural place for all of us. Rather than the Bible, the beginning point for discussions on homosexuality should be the personal experiences we all share."

The panel's decision on Monday will likely be appealed.