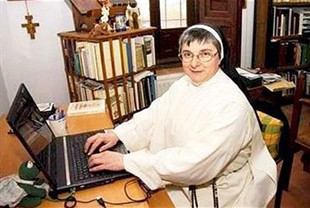 A Spanish nun has been expelled from the convent where she lived in seclusion for 33 years because she spent too much time on Facebook. Maria Jesus Galan announced on her Facebook page that she was asked to leave the religious order after a quarrel over her cyber activities.

The 54-year-old dubbed by her fellow nuns as "Sister Internet" collected almost 600 "friends" on the social networking site around the time of her eviction. But now fan pages with thousands of supporters have cropped up calling for her to be allowed back into the fourteenth-century Santo Domingo el Real convent in Toledo.

The convent's Mother Superior first allowed a computer inside the premises after she was persuaded it would reduce the need for nuns to enter the outside world.

"It enabled us do things such as banking online and saved us having to make trips into the city," Sister Maria was quoted as saying.

Sister Maria scanned in the convent's precious library archives, page by page, making them accessible to the world in digital format — a painstaking task for which she won a local government prize in 2008. The award made international headlines and brought Sister Maria scores of Facebook friends.

But other nuns disapproved and "made life impossible" for her.

Sister Maria is now living at her mother's house and told the newspaper she was ready to make a fresh start somewhere else.

"I would like to visit London and New York," she posted on her Facebook page. "Such things were impossible to even dream when at the convent."

MADPRIEST'S THOUGHT FOR THE DAY

To retreat from the world for a time is Christlike.
To turn your back on the world is heresy.