I receive quite a bit of hate email. I regard it as a badge of honour as it shows that I am getting under the skin of the haters. But I received the following unsigned attack through the post this morning and I can see from its contents that it has come from either someone at my previous church or someone on the bishop's staff. I don't believe it to be the latter. Although I am reading and writing about people actually being treated as less than human, physically attacked or even killed, everyday due to the hatred inherent in those who claim to be religious in this world, it still surprises me, and in this case, upsets me, when a so-called Christian can act on the hatred and bigotry in their hearts in such a way. I have met many mentally ill people in my recent life and I can promise you this letter did not come out of madness. It came out of evil. 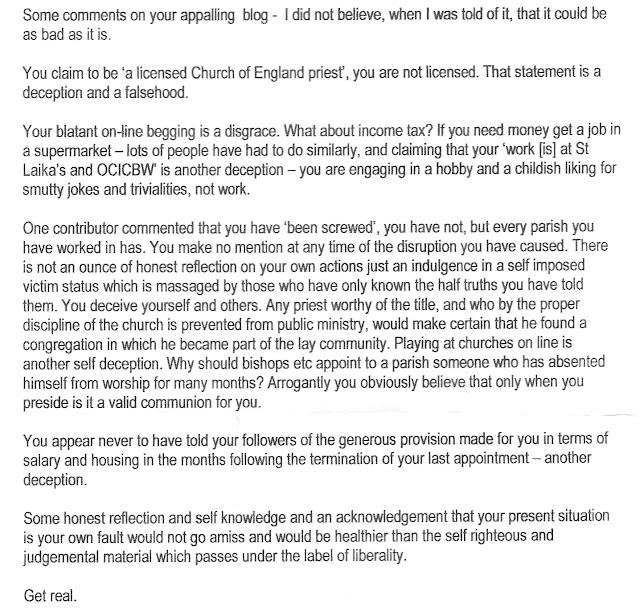 Now, I completely accept that not one of my regular readers will expect me to justify any of the points raised by my anonymous libeller, but I need to say the following.

All donations are recorded and I have already spoken to my accountant about them. After the 31st of March this year I will have to declare them to the taxman. Due to amount I have received so far, I will not have to pay any tax on them as my total income will fall under my allowances. I will have to pay a small percentage of what I have been given to pay for national insurance.

I have received no money from the diocese since the end of August last year. I received my first donation in respect of my unemployment on 24th. September 2011.

I am a beggar. If I was a Hindu or Buddhist cleric, chances are that is how I would earn my money. Saint Francis, and all his followers up to the present day, have survived through begging. Jesus and his disciples survived by begging (I know this because I actually read the Bible everyday). It took me a while to get used to the concept but I now embrace it and rejoice at the freedom from hypocrisy that it gives me.

My anonymous correspondent does not want me to know who he or she is. Since I began OCICBW... my real name and location has been up on the sidebar for all to see. I do not write or say anything that I am not prepared to own and I can be easily tracked down. Heck, if people feel so inclined, they can even write me a letter.

Okay, here's a cheeky suggestion from your very own holy beggar. If you really want to get up Anon's nose, and only if you can afford to do so, you could always send me some cash in support of my "immoral" ministry. My unemployment benefits ceased today (£65.00 per week), so I could do with the money. These are the details of how to do so:

The administrator of this site is the Reverend Jonathan Hagger (a.k.a. MadPriest). He is a Church of England priest but he receives no salary from any church or any other employer.
At present his ministry consists entirely of his work at St. Laika's and OCICBW...

However, he likes to eat occasionally and his blogs cost quite a bit of money to run. So, in true Anglican style a collection plate is being made available for your donations (via PayPal).

Full accounts will be posted here each year. You will never be asked to pledge or tithe but a regular monthly contribution from you would give him security and peace of mind.

You do not need to have a PayPal account to subscribe or donate via the buttons below.

Another way to help Jonathan is to buy Amazon products via his Amazon shop. Details of how to do this can be found below.