Waiting for the bride at the altar, Fr Tim Codling began to realise that something wasn't quite right when he saw her at the back of the church pulling her wedding dress out of a black bin-liner. In full view of everyone present, she proceeded to change into the dress. It became clear it was twice her size as she walked down the aisle, struggling not to trip over it and with the sleeves hanging down to her knees. As she stood next to the groom, there was not only an obvious lack of affection, but more alarmingly a complete lack of recognition.

"It was as if they'd never met each other before," says Fr Codling, rector of St John the Baptist in Tilbury, Essex. "Looking back now, I realise that they probably hadn't."

The wedding was one of dozens of marriages at his church that he believes were part of a scam designed to allow immigrants to gain British citizenship.

Concerned that he was being asked to perform bogus marriages, the rector informed Chelmsford's diocesan registrar of his fears. He repeatedly called to advise he would not recommend applicants be given common licences – a requirement for foreign nationals wanting to marry in church. Often, applicants could not prove the necessary "qualifying connection" with the parish and the vicar suspected that neither partner was a genuine resident. Addresses given by "couples" married at St John the Baptist, obtained from the church's marriage register, proved to be false when visited by The Sunday Telegraph.

Yet despite Fr Codling's warnings about the validity of the applicants, they returned from the registrar with the common licence, leaving him little option but to take their weddings.

In 2009, Fr Codling refused to conduct a wedding involving a Ghanian bride whose visa had expired. He told officials that any marriage would potentially be illegal as she did not have a legal right to remain in the country. However, the Rt Rev John Gladwin, then the Bishop of Chelmsford, rejected his advice and sent his chaplain, the Rev Chris Newlands, to take the ceremony.

Fr Codling says he felt that they thought he was being difficult.

Faced with having to officiate at weddings he suspected to be sham, he began to interrupt ceremonies and escort couples from the building when he was convinced they were bogus. He was verbally abused as a result and on one occasion Nigerians broke into his house and confronted his wife. She had a rape alarm installed by their front door. He called his local bishop, the Rt Rev Laurie Green, the Bishop of Bradwell, but was dismayed by the response.

"I was given the impression they were thoroughly disinterested in what I was saying. I expected a lot of support considering what we were going through, but he said he didn't have time to listen to my stories."

Instead of receiving backing from the diocese, when he finally did receive a personal visit from the Ven David Lowman, the archdeacon of Southend, he says he was threatened with disciplinary action if he continued to refuse to conduct marriages.

"It left me in a really terrible position because it meant that I had to stand in front of these couples in church conducting marriages I knew were unlikely to be genuine," he said.

Despairing at the lack of support from the Church and growing increasingly anxious that he could be arrested like other clergy caught conducting sham marriages, he turned to the UK Border Agency. In August, staff from the agency arrested a couple. Since the raid there has been a noticeable drop in applications to marry at the church.

COMMENT: I wonder how much the bishops and archdeacons would have bent over backwards to get these foreign nationals their welfare payouts if the diocese didn't take a pile of cash every time a couple gets married in one of their churches. And, I would point out, the parish priest gets nothing for conducting weddings. 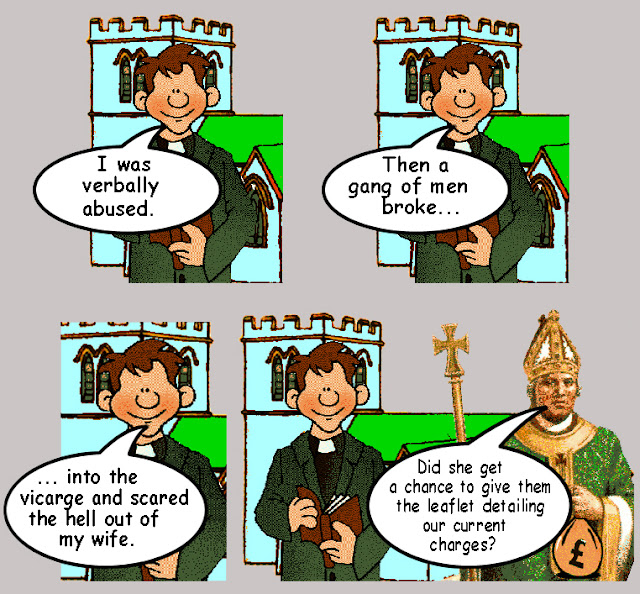