When a parish becomes vacant in Durham Diocese, only clergy in the diocese are allowed to apply for the job. If nobody in the diocese will touch it with a barge poll they allow outside applicants to go for it.

I could have lived with that and hopefully would have changed their views if I had got the job. So, I researched the post and then spent the usual couple of hours or so putting my application together.

That was a month or so ago. This evening I received this email: 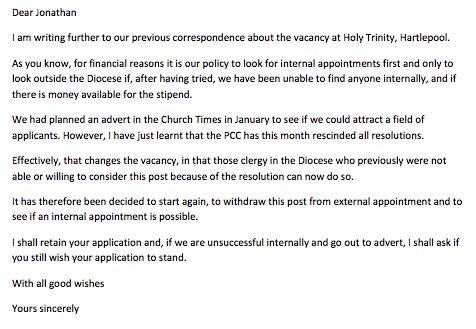 I really don't think I will be able to carry on much longer.

It is becoming patently obvious that I will never be a priest again. Mrs MP decided this months ago and has been telling me so regularly. My choice now is whether or not life is worth living if the purpose of my life has been taken from me. I can, as I have said before, see nothing ahead of me worth sticking around for. I'm not saying this out of depression (I have never had suicidal thoughts), it's just a matter of cold logic. The Church  is treating me as if I have no worth as a human being and, perhaps, they are right.