I had to give Sally at ETERNAL ECHOES a right dressing down this morning. She admitted on her blog that she has already taken down her Christmas tree.

I said to her:

Look here! It's this sort of liturgical incorrectness that has brought the Church to the sorry state it is in today. Christmas decorations should not be removed until Epiphany, or Candlemas if you wish to be truly orthodox.

Now, go and put the tree back up and don't touch it again until Thursday!

Really, Sally, I never thought I would have to lecture you on such important matters.

She came back with some nonsense about God not being "half as liturgically correct as we might think," which just compounded her heresy.

Of course, if churches are going to put up their Christmas trees even before Advent has got going rather than on Christmas Eve (when Mary and Joseph, who invented Christmas, put their tree up), then this sort of unforgivable slackness is going to become commonplace.

This is the sort of communion breaker about which which Rowan Williams should be using his Christmas Message to offer correction, rather than him talking a load of twaddle about looking out for poor people, many of whom cannot afford Christmas trees and so cannot really be considered Christian by any stretch of the imagination. And if they are not members of our Church why should we bother about them anyway? We have far more important matters to concern ourselves with - such as the correct time for taking down the Christmas tree! 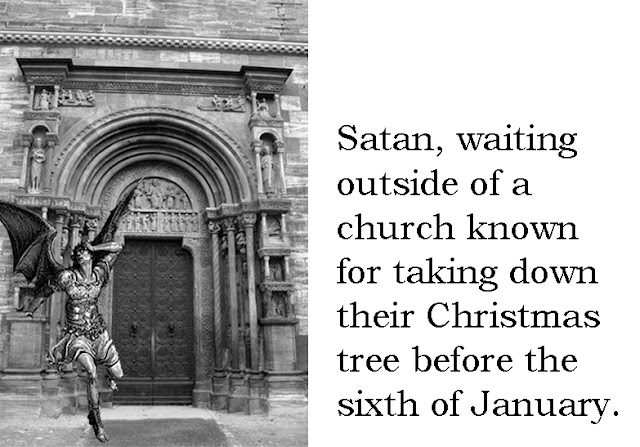