The pressure group, Fulcrum, is the "model village" of fundamentalism in the Church of England. It seems so innocuous, so third way, and claims to adhere to a so-called "open evangelicalism." However, in reality, it is no different to the "model villages" set up by despotic regimes in order to persuade visiting dignitaries that their countries are really very nice and democratic and all that. It is the spin doctor of conservative evangelicalism in the C. of E. and, when things heat up, hiding behind semantics and a false reasonableness, it promotes the party line with vigour, as an article by the suffragan bishop of Sherbourne, Graham Kings (Fulcrum's very own Alastair Campbell) at THE GUARDIAN today, demonstrates very well  in deed.

The covenant has been portrayed, and betrayed, by its detractors as a dangerous, monolithic innovation of regulatory control, which will stifle freedom and diversity. But forced assimilation is not on the table, and it is false witness to dress it up as such. Gregory Cameron (secretary to the group who produced the covenant) and Andrew Goddard (Anglican ethicist) have demonstrated that its detractors have seriously misconstrued the text and its intention.

The model of the covenant is drawn from family ties and kinship and bounded by mutually agreed norms of behaviour which benefit everyone. It is not a document of doctrinal specifications, like the conservative Jerusalem Declaration, drawn up mostly by those who boycotted the Lambeth conference. Nor is it a contract, as feared by its liberal critics. It is truly a covenant.

In his address to the Lambeth conference 2008, the Chief Rabbi, Jonathan Sacks, was pithily penetrative and perceptive in drawing out contrasts: "A contract is a transaction. A covenant is a relationship. Or to put it slightly differently: a contract is about interests. A covenant is about identity. It is about you and me coming together to form an 'us'. That is why contracts benefit, but covenants transform."

Lay people and priests, as well as bishops, are crucial in crises and in the vote on the covenant. The progress of the covenant does indeed move at a glacial pace, but the debate next week forms a focal point in the stretching of our Anglican imagination. The communion does not need conservative or liberal incitements to isolation but encouragement to interdependence. Where there is a will, there is a middle way.

This is the comment I left at the Guardian:

I cannot emphasise enough the damage the Covenant will cause to local (especially lay) involvement in the debates of the Anglican Communion. If the Covenant is adopted then not only will there be coercion from the centre to stop discussion on "controversial" issues at the local level (just as in Roman Catholicism) but there will be absolutely no point in anybody, other than the primates of the party with the most votes, to discuss anything. What would be the point, for example, of discussing the role of LGBT people in the Church at a parish away-day, if everyone involved knows full well that the decision has already been made, and written in stone, by the Curia. When you add that to the fear, that will soon come, that disagreeing with those in power will get you into trouble (again, as in Roman Catholicism) it is obvious that the Covenant is just the Archbishop of Canterbury's attempt to disenfranchise the laity and parish priesthood by the back door (and please feel free to take that last phrase as an innuendo because, although I can't say it outright, it is exactly what he is doing to us). 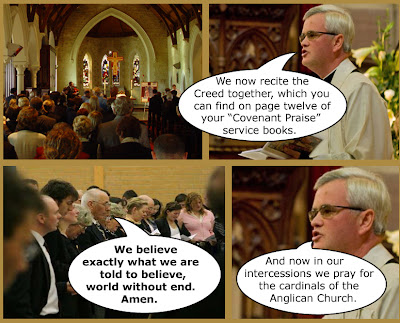