I suppose eternal life must get a little boring at times. Even an archetypical woman like the BVM must get bored of daytime television after 2000 years. Up until now, she has livened up her days by popping downstairs and turning up on pieces of toast and the like or splashing water on the faces of statues of herself, which is just harmless fun. Even her winding up of schizophrenics and teenagers in villages where there's nothing for kids to do after school, although in poor taste, are understandable diversions for a woman who is forever virgin. But a report from Spain, that has just arrived at our offices, indicates that her little jokes may be getting out of hand, even bordering on the illegal. 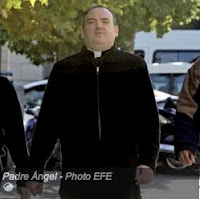 A priest from Picassent in Valencia who is accused of tax fraud has said that being a priest he thought that he did not have to pay any tax. Padre Ángel claims that he has contact with the Virgen María and that he purchased a flat at her request. He set up his own religious order, La Junta de la Esclavitud del Sagrado Corazon de Jesús, (The Order of Slavery of the Sacred Heart of Jesus) and purchased the flat and other land in Picassent, Gandía and Valencia with the money donated by the faithful.

Far be it that we should tell heaven's first family how to conduct their own affairs, but maybe it is time that Jesus had a word with his mother about her "practical jokes." Such things can easily and quickly get out of hand. Remember the fuss there was when his father humorously quipped to a certain president and a certain prime minister that "Perhaps they ought to invade Iraq?" The holy family need to realise that not everyone has such a developed sense of humour as themselves and there are even some fools down here who take everything they say literally.