The mutual life of the Anglican Communion is “quite strong and perhaps getting stronger” according to the Archbishop of Canterbury, Dr Rowan Williams. In an interview with THE HINDU newspaper, Dr Williams indicated that the state of the Communion was not as black as some have painted it. He called it “a very mixed picture.”

“I think that after the Lambeth Conference of 2008 many people felt that we found ways of talking to one another, and perhaps exercising some restraint and tact towards one another,” he said, "and it was very significant that at the next meeting of the Anglican primates, which was in the early part of 2009, all major Churches of the Communion were represented.

“Unfortunately, the situation does not remain there. The decision of the American Church to go forward, as it has, with the ordination of a lesbian bishop has, I think, set us back. At the moment I'm not certain how we will approach the next primates' meeting, but regrettably some of the progress that I believe we had made has not remained steady.

“Alongside that, and I think this is important, while the institutions of the Communion struggle, in many ways the mutual life of the Communion, the life of exchange and co-operation between different parts of our Anglican family, is quite strong and perhaps getting stronger. It's a paradox.

“We are working more closely together on issues of development than we did before. We have the emergence of an Anglican health network across the globe, bringing together various health care institutions. We have also had quite a successful programme on the standards and criteria for theological education across the Communion. So, a very mixed picture.”

In the interview, given in the last days of his two-week visit to India, the Archbishop also addresses questions on relations with the Catholic church, Anglican-Hindu dialogue and the 'war on terror'. 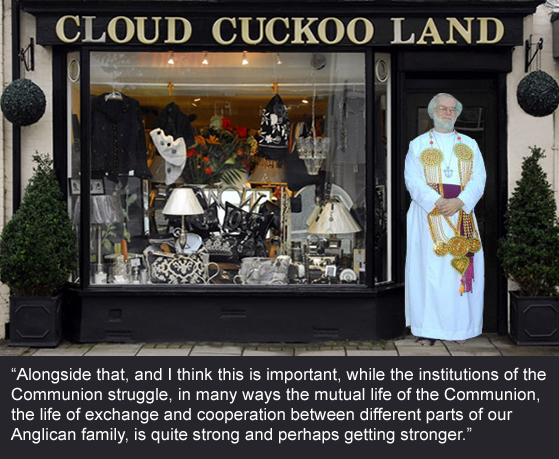