From CITY ON A HILL PRESS (Santa Cruz): 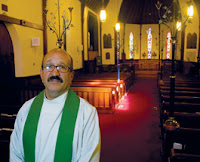 In June 2008, Rev. Joel Miller, head reverend of Calvary Episcopal Church, initiated Coffee House Ministry. Along with some local homeless activists, Miller led this Monday night philanthropy tradition, in which the church welcomed homeless people for coffee and dinner. As many as 150 people would show up on any given night.

However, some churchgoers grew irritated with the attention Miller was devoting to homeless issues, as well as the way the church was transforming into a haven for the homeless. The anger escalated on June 11, last year when an argument between a parishioner and a homeless man allegedly ended in the man shaking the woman by her shoulders and yelling. Miller was then charged with “conduct unbecoming a member of the clergy” by the Episcopalian Church, a serious charge that could result in the clergyman’s suspension or even defrocking.

Although violence should never be tolerated at a church or anywhere else, it is a mistake to let one altercation define all of Miller’s efforts. Incidents happen, and the police arrived quickly to diffuse the situation. One man’s mistake should not overshadow the world of good Miller did by opening his church and its resources to Santa Cruz’s homeless community.

The problems facing homeless people in Santa Cruz have been well documented in City on a Hill Press. The city does not have enough shelters and kitchens for everybody. Providing a space for people to safely congregate is a great help — and exactly the sort of thing Christians are supposed to do.

In his Sermon on the Mount in the Bible, Jesus says, “Give to the one who asks you, and do not turn away from the one who wants to borrow from you” (Matthew 5:42).

Instead of being hardhearted and tightfisted, the Episcopalian higher clergy, Calvary Episcopal Church parishioners, and the Santa Cruz community in general should be grateful towards Miller.

He should be gaining new members for his church, not losing them.

The first charge, that Miller "brought disrepute and material discredit upon the Church," alleges that he "failed to create working relationships of cooperation and trust" between Calvary and city leaders when he allowed the feeding program to set up at the church.

The second charge has to do with a June 11, 2009, meeting that had been called after Calvary member Margaret Statzer was grabbed and shaken on church grounds by 23-year-old Jeremy Hess-Neve, a Coffee House Ministry regular. Statzer and others who attended the meeting say Miller said that the police had told him Statzer provoked the attack herself by starting an argument with the young man. Santa Cruz Police Department Chief Rick Martinez, who was at the meeting, says that's false.

"After he said that, I confronted him because I wanted to know who this cop is that said that, because it's certainly not appropriate," says Martinez, who says Miller couldn't remember which officer he had spoken with. "Plus, if you look at the facts of the case, that's clearly not what happened."

If the Monday night feedings had left the congregation divided, the notion that Miller would seemingly take a "street kid's" side over a fellow parishioner's left many downright furious. Many stopped coming to church altogether. Some of those, like Libby Alexander, say Miller is "dictatorial" in how he runs his parish. Another, Catherine Gill, says he uses feeding the homeless as a "smokescreen" for insensitive and egotistical ways. Statzer says she no longer even considers herself Episcopalian.

"I was assaulted on church grounds, defamed by my priest and I had no one to go to. This isn't about the homeless, it's about Joel Miller not being fit to be a priest," says Statzer, who joined eight other parishioners in signing onto the charges that spurred the investigation. "Even the bishop stonewalled me when I went to her. The Episcopal Church has put me through hell. Why would I want to be a part of it?"

Miller can now either hire an attorney and fight for his innocence in ecclesiastical court or "submit to the will of the bishop" and throw himself at the mercy of Bishop Mary Gray-Reeves—an option he says he's leaning toward, because, he says, he can't afford to hire an attorney.

The entire affair comes during what nearly everyone involved says is a vastly improved homeless outreach service with a fraction of the loitering and antisocial behavior that marred it last year. Crime data provided by SCPD shows that emergency calls for service at the church peaked last summer with 38 calls from June through mid-September, while there were only 16 calls during the same time period this year.

COMMENT: I know of a case, involving someone inside the OCICBW... community, in which the congregation hounded out a priest because said priest tried to get the congregation to "get involved" in mission and all that Christian nonsense. So I tend to believe that what we have here is a case of a bunch of snobby Episcopalians, who want their church to remain a nice little social club for the nicer sort of Santa Cruz resident, being downright unchristian and hateful towards a priest who has read the New Testament (an act that often gets the more conscientious priest into deep water with both his or her congregation and bishop). But, I could be wrong. So, if you have inside information (or even just some juicy gossip) about this situation, do let me know.