Friends and neighbors of Tehachapi 13-year-old who attempted suicide Sunday said the boy is openly gay and was taunted by bullies for years, at school and at a local park. The bullying might have been what led him to try to take his own life, friends said. The boy hanged himself at his own home from a tree and has been on life support since Sunday, according to the Tehachapi Police Department.

He previously attended Jacobsen Middle School, but was put on independent study this year. Friends said he was still bullied outside of school for being gay and bisexual, but he didn't tell close friends how the bullying affected him.

COMMENT: Thanks to Priscilla for sending me the link to this story. She writes:

Perhaps I am too hard-hearted but I believe that every single one of these horrible tragedies will continue to hang around the necks of people like Rowan Williams, like a necklace of skulls, unless and until the find the courage to speak out against them and to actually do something to stop them. 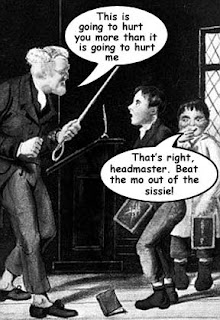 In my opinion the ongoing "nature v. nurture" debate over whether homophobia is genetic or acquired is over. Kids bully gay kids because their parents bully gays - in their language as well as physically sometimes. Rowan Williams is the bully in the school playground who drives gay children to the point where they believe death is better choice than life. His "gay people can be bishops but can't consummate their love" drivel is just a disingenuous, grown up version of calling the lad at the desk next to you a mo or a sissie. On an issue where there really aren't any shades of grey, Williams has chosen black. He has wrestled the Church from the arms of Christ and given it back to the pharisees.

Here's a tune from Patty Griffin:

Hey tony, what's so good about dying?
He said I think I might do a little dying today.
He looked in the mirror and saw
A little faggot starin back at him.
Pulled out a gun and blew himself away.