Parishioners from the St. John the Evangelist Episcopal church in Hingham were setting up for a post-Mass picnic at the town's Bathing Beach Saturday night when they were interrupted by the sound of gunfire and the sight of a wounded Canadian goose slowly dying, the rector, The Rev. Timothy Schenk, said. 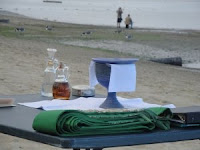 The Mass, which was geared toward children, ended at about 5:30 p.m. and the picnic was about to begin when the parishioners saw three geese fly by, and then heard three shots. Two men were hunting geese on the beach. They hit one of the geese, which fell into the water. It was wounded, but not immediately killed. The goose tried to swim away as the hunters took a couple more shots at it, missing it.

“Usually, when you hunt, you have some sort of provision to get what you hunt. This was not the case as the goose, struggling to swim away, “just kind of slipped under the water,” said Schenk.

Schenk said he held a “preach at the beach” Mass “to remind people that God isn’t under house arrest at a church. God is everywhere,” he said.

COMMENT: To be honest, I think the goose would have been better off in the Reverend Schenk's church. God was sort of conspicuous by his absence on the beach (unless God doesn't like geese).