You can imagine all your own jokes about dogs going to church, and members of Covenant Presbyterian Church in Los Angeles have heard every one of them 100 times since they began regular weekly worship services with their pets nearly a year ago.

“I have to admit, even I call it the Doggie Church sometimes,” said the Rev. Tom Eggebeen, a Michigan transplant to Los Angeles three years ago.

He has seen the biggest growth in his aging and previously shrinking congregation by launching this weekly, Sunday-afternoon service at which parishioners can bring along their four-legged best friends.

“We asked a focus group of cats if we should include them and they all agreed the dogs need church more than they do,” joked Eggebeen, laughing then apologizing. “Sorry. You can imagine that I needed to develop quite a few lines like that to get people to lighten up and open up to this concept.

On Sunday afternoon, Eggebeen showed up just after 4 p.m. to arrange seating for up to 30 humans and their pets at the 5 p.m. service. He spread out chairs and fluffy white dog pads, using the chapel’s space lengthwise to face a side altar. The arrangement places him just an arm’s reach away from the long front row in this casual service. Occasionally, he pets someone’s dog himself. During the offering, ushers pass both a collection plate that the humans fill and a basket of dog treats that the canines empty.

At that point in the service, Eggebeen invites people to lay a hand on their pets and join in prayer for the concerns of the world, their lives and their pets.

On Sunday, during those prayers, Eggebeen added: “We also pray for animals living in distress. We remember all those animals who are living under deplorable circumstances.”

During this prayer time, individual prayer concerns from the congregation are mentioned by Eggebeen, as they are in thousands of other churches nationwide. But, this list of prayer requests also includes pets struggling with cancer or other major challenges. On Sunday, he also announced that one pet had died the previous week. Eggebeen asked parishioners to remember that family in their own prayers this week.

“Here’s the simple truth," stated Eggebeen. "Where there is love, there is God. For many people, especially people living alone, their dogs are their best friends, really essential companions in their lives. And we always emphasize: We’re not worshiping dogs. We’re worshiping God. But in this worship service, we welcome the whole family, including our four-legged family members.” 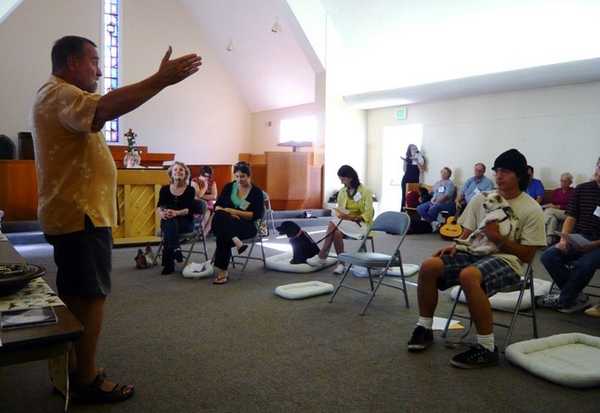 COMMENT: This is something that I will definitely introduce should I ever be given the incumbency of a new parish. I just hope I don't end up in horse country.

Thanks to skittles for sending the link
to this story into MadPriest Towers.